“The best of Norvin Green State Forest encapsulates the best of what New Jersey running has to offer. ”

Norvin Green State Forest is a 5,400-acre park with approximately 25 miles of blazed trails, and this Featured Run takes a route that highlights many of the park's best features.

There are multiple vista points, including views of the New York City Skyline, a waterfall, rock scrambles (minor), a small river, and a wonderful section of boulder hopping through a low lying wetland.

At just over seven miles in length, the run is doable for most runners that don't mind a bit of elevation gain.

This route can be extended about a mile by skipping Outlaw (Orange Blazed), and taking Wyanokie Crest directly to Otter Hole trail. There are many different trails and a good color-coded paper map or the Trail Run Project mobile app are of great use here.

Also, there are no bathroom facilities within Norvin Green State Forest so please plan accordingly.

Finally, and strangely, on multiple occasions runners have reported daytime sightings of ragged looking raccoons that are not afraid of humans.

Start your journey at the northeast end of the State Forest at the Weiss Ecological center, picking up Otter Hole Trail off the parking lot. This green-blazed trail takes you past a Natural Pool (members only) and some minor cascades that feed into it. This section is uphill but generally less than 10% grade.

After one-third of a mile, leave the Otter Hole Trail by bearing left onto the blue-blazed Hewitt-Butler Trail. This section climbs about 400 feet in seven-tenths of a mile and has some enjoyable minor rock scrambles and hill top viewpoints of the surrounding ridges.

Soon Hewitt-Butler intersects with the red-on-white-blazed Wyanokie Circular Trail, a must-do detour of a short few hundred yard excursion up to Wyanokie High Point. Follow the red blazes up a rock scramble for a 360-degree panoramic view of the Wanaque Reservoir to the east and the picturesque ridges in surrounding areas. The High Point is atop exposed bedrock with much room to explore the area, including a steep ledge on the western flank. After exploring, head back down the red blaze making a left (south) back onto the blue-blazed Hewitt-Butler Trail.

Follow the blue blazes about 1.25 miles to one of the trip highlights, Carris Hill Trail. Descend this yellow-blazed trail a little over 600 feet in three-fourths of a mile through some interesting switchbacks, minor rock scrambles, and great scenery. There is a huge outcrop about 1/4 of the way down the hill that is a must do scramble. At it's peak, there are panoramic views of the reservoir and on a clear day you can see the New York City skyline.

Posts Brook, at full flow, is quite lovely. Rather swift flowing, there are some bends to its course that are worth a pause for a photo opportunity. One-third of a mile later, still on white, is Chikhoki Falls, a picturesque cascade that the trail follows to the top.

Shortly thereafter, the white-blazed Posts Brook Trail intersects with the blue-blazed Hewitt-Butler Trail, the same blue blaze from earlier. Bear left (west) for four-tenths of a mile and pick up the yellow-blazed Wyanokie Crest Trail.

This 1.25-mile section of Wyanokie Crest is wonderful. Half of the trail follows a minor tributary of Posts Brook and features a dual-log stream crossing and several sections of boulder hopping, including one before leaving the stream's side through a low lying wetland swamp where the 'trail' route is up to the individual to pick and step their way across.

After leaving the tributary, bear right (north) onto Outlaw (Orange Blazed) for just two-tenths of a mile and join with the red-on-white-blazed Wyanokie Circular Trail again. Be sure to bear left (north) and just one-tenth of a mile later turn right onto the original green-blazed Otter Hole Trail you started with.

From this point, it is a 1.6-mile return leg to the parking area. This section of the Otter Hole Trail is almost entirely downhill and follows a good portion of the base of Assiniwikam Mountain and offers interesting rock formations and a final stream crossing.

Typical northern New Jersey hardwoods and some wetlands. Springtime also highlights some natural wildflowers along the path of some trails.

Another section of the park features an old 1800's abandoned iron mine that can be entered.

in Norvin Green State For… 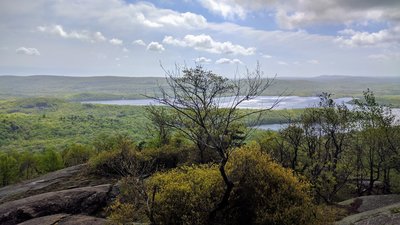 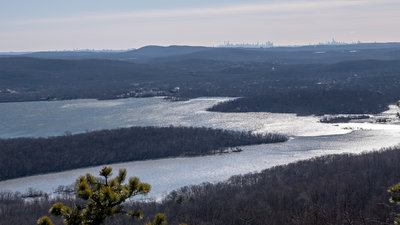 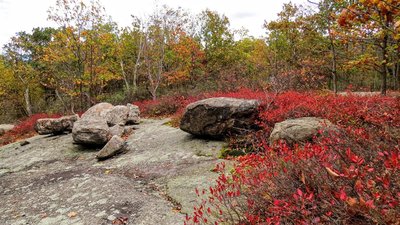 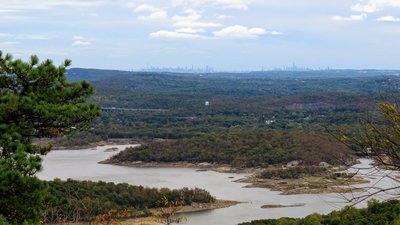 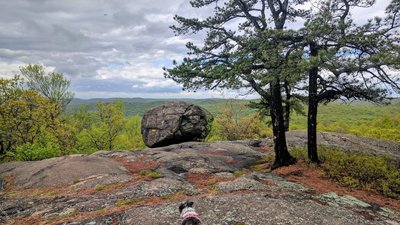