The Virgin River Gorge is beautiful but most people only ever see it from their car at 60+ mph. This is entirely understandable because one is already four hours into a journey from Salt Lake City with who knows how many hours to go or is hitting it near nightfall from the south after a similarly long drive. So despite a clearly marked exit off I-15 for Cedar Pocket, this area receives few visitors.

But one trip I decided to camp here (just $6 / night) and set out on this trail just before 8 am. The early start provided interesting light and a good running temperature (in June). The first 60% of the trail follows the Virgin riverbed before climbing a slight plateau and then descending to a wash.

I've rated this trail as only 3-stars due to the distant freeway noise but I feel 3½-stars is more accurate.

The formal trail ends at the wash, though based on Google Earth it appears one could follow washes all the way down the gorge. One choice is cross the big wash at the end of the trail, catching a smaller wash that heads SSW, then south, and finally curving westward to end at I-15 near the bottom of the gorge. Following the main wash south would get one in the vicinity of Mt Bangs for a possible pickup along BLM 1004 (4x4 required) in Arizona which could be reached from Mesquite, NV and Scenic, NV via BLM 1299 or from the Utah-Arizona border via BLM 1009 off the Southern Pkwy (Highway 7). These look like intriguing journeys but careful planning would be required as it looks like the chance of finding water along the way would be slim to none.

Note: the Sullivan Canyon trailhead sign mentions a Cougar Spring 15.9 miles from the start, i.e. 14.1 miles beyond the wash at the end of the Sullivan Canyon Trail. Bill Weir mentions Cougar Spring which appears to be about a 1.6 miles SSE of Mt. Bangs where BLM 1299 the intersects the Mt. Bangs Rd, which is about where one would end up by following the big wash at the end of the Sullivan Trail, navigating carefully near the end where the wash narrows near the Paiute Wilderness northeast of Mt. Bangs.

Note: Trail sign calls it Sullivan Canyon. Google Maps has it as Sullivan's Canyon. Others call it Sullivans Canyon without an apostrophe.

in Virgin River Canyon Re… 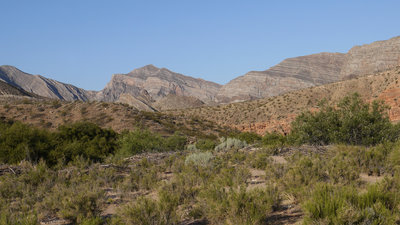 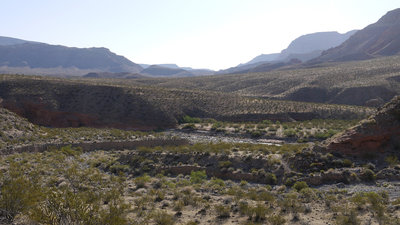 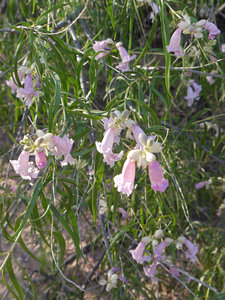 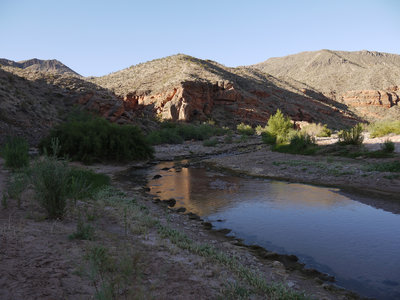