“A short trail to a pond in Monte Bello Open Space Preserve. ”

The preserve is open year round from dawn until half an hour after sunset. While dogs are allowed in many of the Open Preserves, they are not allowed in Monte Bello Open Space Preserve.

This trail is narrow and overgrown. It's hard to see where you are running, and the grasses and brush grow into the trail, making it not ideal for running.

This short .3 mile trail descends from a parking area on Page Mill Road to a pond located in the Monte Bello Open Space Preserve. After passing through the gate, the trail to the pond breaks off to the right and follows a wide grass path that eventually narrows as it descends to the pond. The trail is not heavily traveled, so it can be overgrown with native plants found in the Monte Bello Preserve.

The trail descends until it comes to the pond, where signs indicate that fishing and swimming are prohibited. Due to drought, the pond has dried up some, and all you initially encounter are cattails and other grasses that grow around ponds.

If you follow the narrow trail through the brush to the right, a narrow trail that is used by animals more than humans, skirts the edge of the pond. Following this trail will lead you to the portion that still has water in it. From here, you can observe ducks swimming and feeding in the pond. Even smaller trails, used by the animals, make their way down to the water's edge, but aren't recommended for humans. The trail ends at the end of the pond. Views of the surrounding hills can be enjoyed throughout the trail and if you are looking for solitude, there's a fair chance you'll get your wish.

There are cattails and other water related plants growing around the pond. Various species can be seen swimming and feeding in the pond. Deer, rabbits, coyotes, bobcats, mountain lions, and other animals might be seen in the mornings or evenings as they come to the pond to drink, as is evidenced by tracks and droppings in the area. 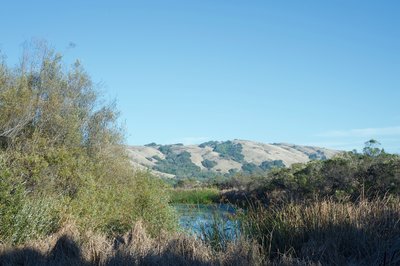 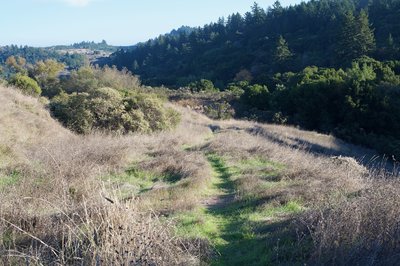 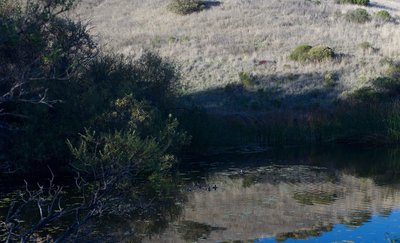 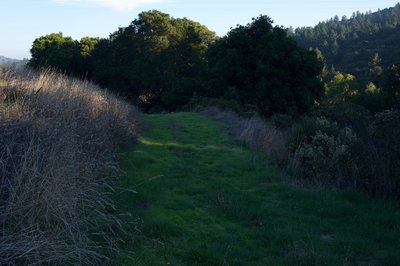 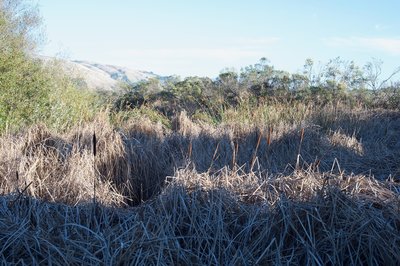