“A spectacular route leading visitors through rugged terrain from Lukla to Everest Base Camp. ”

This unique trek starts with a spectacular flight from Kathmandu to Lukla, from where we take an unusual route through the heart of Sherpa country. This creates a much more interesting trek to the highest mountain in the world. The long, arduous trek culminates with an early morning ascent of Kala Pattar (18,188ft/5,545m), which overlooks the Base Camp and offers superb views of Everest, Lhotse, Nuptse, and Makalu.

It is important to be physically prepared for the journey. The trip is rugged, the area remote, and most visitors will need to be especially careful to keep an eye out for altitude sickness (AMS).

Extra care should be taken as this is a trekking trail; also be careful while yaks (mountain cows) are passing with loads - it is best to step aside for safety.

Day 1: Kathmandu - Lukla 2835m – Phakding 2635m. Our early morning flight brings us to Lukla, the most well-known mountain airstrip and one of the busiest runways in Nepal. On arrival, we meet our staff. Surprisingly, this high-altitude trek begins by descending to the river at Phakding. The trek on this day will take about 3 hrs.

Day 2 : Phakding - Namche 3445m. The first day may have been a long day to start for some, but it allows us to begin the ascent to Namche Bazaar first thing in the morning. At about half-way up the ascent to the bazaar, a gap in the trees allows us to spy Everest for the first time. If the weather is clear the top, the South-West Face will be just visible behind the long Lhotse-Nuptse ridge. A plume can often be seen stretching away from the very summit. Namche is the most prosperous and the largest town in the Khumbu. A bazaar is held here every Saturday where displays include meat, grains, and vegetables, as well as other Tibetan goods. The Sherpas play host to traders from the foothills, as well as Tibetans from over the border. Thamserku (6648m), Kwangde Ri (6187m) and Khumbila (5707m) surround the natural bowl that Namche sits in. This day is longer, and usually the trip takes about 5-6 hrs.

Day 3 : Namche - Khumjung (3,780m). This village is one of the most beautiful in Khumbu. The Himalayan Trust has a school here, as well as a medical post (for locals and trekkers) in nearby Khunde. This trip is quite short, only about 1-2 hrs. Due to the short trip, this day is almost like acclimatization. It is important to take the day off to allow our bodies to adjust to the rarefied atmosphere before ascending to higher altitudes.

Day 4 : Khumjung - Tengboche (3863m). The trail this morning descends to the Dudh Khosi. There are spectacular views of Ama Dablam (6696m) and Kantega (6779m) as well as Everest (8848m) and Lhotse (8501m). Keep a look out for pheasant in the undergrowth. We cross the river at Phunki Thanga and climb through the afternoon amongst rhododendron forest to the saddle at the top of the hill. Suddenly in front of us is Tengboche, the principal monastery of the Khumbu area; the views from here are unforgettable. The outing today takes about 6-7 hrs.

Day 5 : Tengboche - Dingboche (4412m). We follow the path down from Tengboche through the rhododendron forest to Deboche and cross an exciting bridge with the boiling, roaring Imja Khol beneath our feet. A gradual climb takes us to the village of Lower Pangboche. We are now in the heart of the Khumbu, with spectacular views across to Ama Dablam. The afternoon takes us along a path that hugs the valley wall and then across wide plains to a split in the valley. The Khumbu breaks left, up to Periche, but we take a detour right to the hamlet at Dingboche at the start of the Imja Tse valley. Expect a journey of 5-6 hrs.

Day 6 : Dingboche – Rest / acclimatisation day. We encourage you to attempt one of two outings on this day. The shorter option ascends the hill immediately behind Dingboche, to drop steeply down to Periche. The longer option is to trek up the Imja Tse valley towards Island Peak. The views of Lhotse, Ama Dablam and Cho Polu from here are outstanding. After a few hours the trekker terminus of Chukung is reached, and after a rest, we return down the valley. This day is mostly for acclimatizing to the altitude, so please take it easy!

Day 7 : Dingboche - Lobuje (4931m). We climb to the ridge behind Periche and stay high, mesmerised by the views of Tawoche and Cholatse, until we reach the tea houses at Dughla. A steep ascent to the terminal moraine of the Khumbu glacier is now tackled. The top of the climb is marked by a series of stone monuments to commemorate some of the climbers that have not returned from expeditions to this region. A rough but obvious trail cuts across left, away from the glacier, to our camp site at Loboje, a windswept collection of huts tucked in a narrow meadow between the glacier and the Loboje Peak (6156m). The Lhotse ridge is simply awesome from this angle. This final trip takes about 6-7 hrs.

Day 8: Lobuje - Kala Pattar (5545m). On this day, we begin the journey back home. More info can be found by emailing nepaltrekking@gmail.com

Keep an eye out especially for the Himalayan Monal, but you'll also see musk deer, yaks, and many varieties of wildlife.

After 1953, when Sir Edmund Hillary and Sherpa Tenzing Norgay completed the first ascent of Everest, the trip to the mountain and to basecamp has become more and more popular. 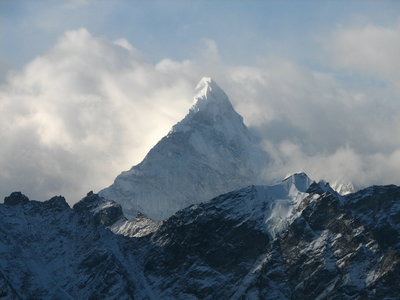 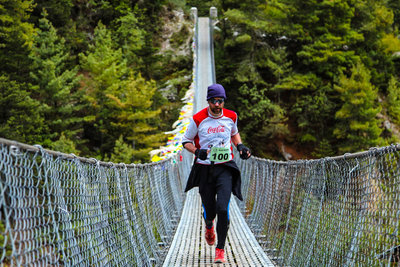 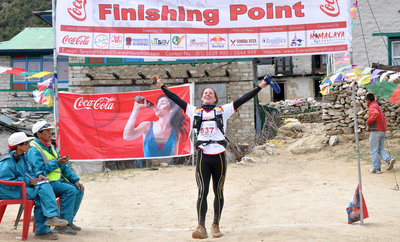 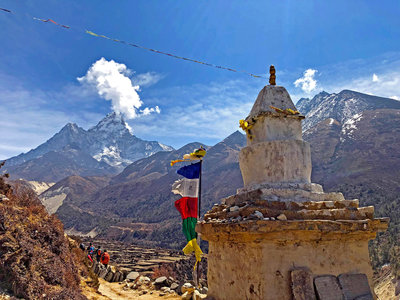 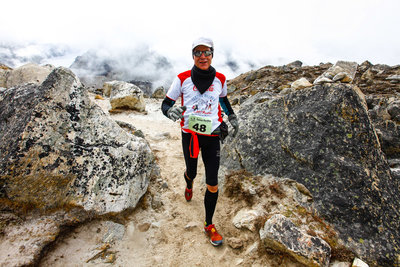 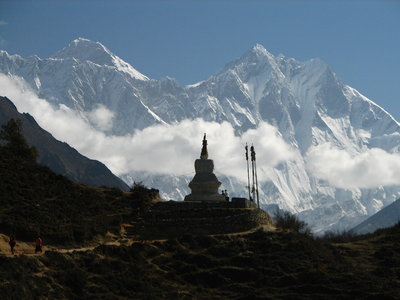