“A mountain top singletrack looking out over West Texas. ”

Wyler Aerial Tramway is generally open Friday through Sunday, with additional openings around major holidays. It may be closed on windy days. Tickets for the tram are $8 for adults and $4 for children under 12. It is not necessary to pay for or take the tram to access the trails on Ranger Peak; the peak is also accessible via Thousand Steps Trail and Directissimo.

The trails in the southern section of Franklin Mountains State Park are among the most rugged and technical in the area. Expect rocky sections requiring skill and experience to navigate. Trail shoes are strongly recommended.

Sections of the Ranger Peak trails near the tram are often visited by less experienced hikers. They may not be familiar with trail etiquette, so give them some extra room and patience.

El Paso is in the desert, so be mindful of the climate. Summers are regularly in the 90's or above, winters will drop to the 30's and 40's. Lightning storms are frequent in the late afternoons during the warmer months. Winds are frequent and gusts over 40 mph are not unusual. Dust storms, strongest in the late spring, can be hazardous and reduce visibility to less than a quarter mile. Check the weather before you go, and let someone know where you will be.

Ranger Peak Loop, which is really only half of the network circumnavigating the Ranger Peak area, begins at the top of Wyler Aerial Tramway. A short stairway descending to the trail can be found just south of where the tram cars dock. Trail users are requested to check in and out at the nearby gift shop.

The trail is a rocky, rugged singletrack cut into the mountainside. After passing underneath the tram platform, it makes a quick descent down the rock face. A few chain-assisted segments have been set up here to help with balance; some runners may find the scramble challenging. Jackaloop Trail splits off to the north at the bottom of this initial descent and, due to the steep climb on Directissimo, is the recommended direction if making the full loop around Ranger Peak.

Ranger Peak Loop then begins a clockwise circle around its summit. A short diversion near a rock shelter to the utility poles provides a nice view of eastern El Paso and Ciudad Juarez. The trail then turns west for its flat portion, interrupted by another chain-assisted climb around the third-mile point.

At the trail's southern apex, another nice viewpoint can be found just a few feet off the path to the left. Next to it, a singletrack heads off to the south along the ridgeline. While often taken by area runners, this is not intended as a public use trail.

If running Ranger Peak Loop in the opposite direction, note that the trail appears to split from this area until returning to the tram, so look ahead carefully before proceeding if the path appears uncertain.

Proceeding northwest, the trail remains relatively flat as it crosses the signed junction with Thousand Steps Trail. It begins another steep climb near the B-36 Crash Site Overlook and its related trail. This tough ascent continues as the path switches up the mountainside to its finish at the top point of Directissimo. A log book and bench mark the summit of Ranger Peak.

Descending Directissimo can be very difficult, so it is recommended that less-experienced runners return the way they came.

Dry higher altitude trail with not too much vegetation. Cacti, agaves and acacias. 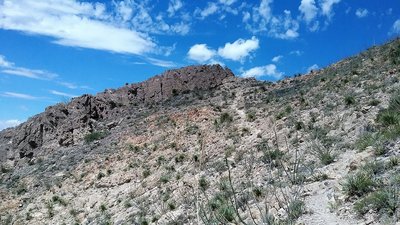