This is a remote section of the wilderness, and therefore extra caution should be taken to avoid injuries as it would be difficult to get out of here. Also, there are plenty of rocky sections and erosion prevention rocks, so just watch your footing.

This trail starts at the end of the Piute Pass Trail and finishes at the John Muir Trail, just above the confluence of Piute Creek with the San Joaquin River.

As the trail leaves Piute Pass, it drops down into Humphreys Basin, which is a vast, expansive basin that allows for great views in almost all directions of the features that surround Piute Canyon. Not far from the pass, one can see down to Summit Lake, a beautiful alpine lake, and several other smaller lakes can also be seen. About a mile from the pass and after a couple of small stream crossings, one can get great views of Mount Humphreys, a beautifully colored, rugged peak to the northeast. One can also see the upper reaches of the Goethe Cirque, with Muriel Peak, Mount Goethe, and other parts of the Glacier Divide from this point, which are truly spectacular.

After passing these viewpoints, the trail continues and passes (not very closely) by Upper and Lower Golden Trout Lake, which are some other pretty alpine lakes, and then leaves the exposed high country as it descends into the forested part of Piute Canyon. The trail at this point also starts to get closer to Piute Creek, a vibrant mountain stream (that might be considered a river if it were in other parts of the country). Eventually, the trail passes by a turnoff (to the south) to the Honeymoon Lakes, which are a couple of high alpine lakes that apparently have good camping nearby them, and are far removed from the trail.

Not long after this, the trail reaches Hutchinson Meadow, where French Canyon meets up with Piute Canyon. To get through this meadow, the trail crosses a braided stream several times, although none of the crossings are very difficult or deep, and most of them have some sort of bridge or rocks to keep your feet dry while crossing.

After passing through Hutchinson Meadow, the trail continues to descend with Piute Creek and eventually breaks out of the forest again as the steep, rocky canyon walls come closer together and leave little room or good soil for large vegetation. In this section, there are some spectacular views of the creek and the surrounding domes and pinnacles, and if looking back the way you came, you can even see Pilot Knob. There are also some spots along the trail that get really close to the raging creek, and there are a few pretty cascades along the way.

Eventually, the trail reaches the junction with the John Muir Trail at a sturdy bridge that crosses Piute Creek. 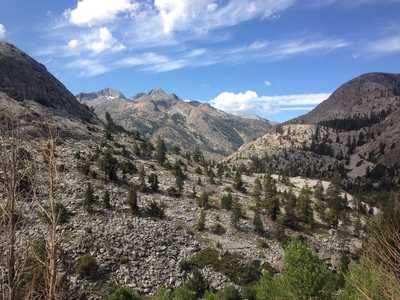 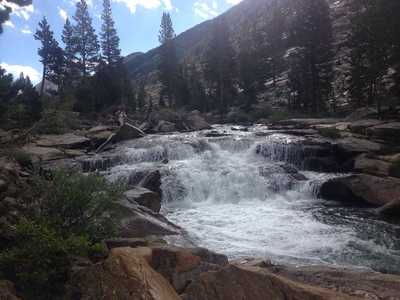 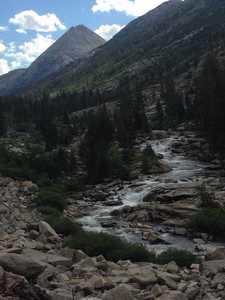 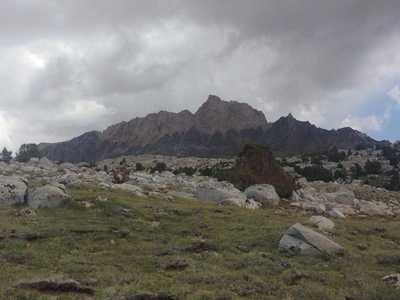 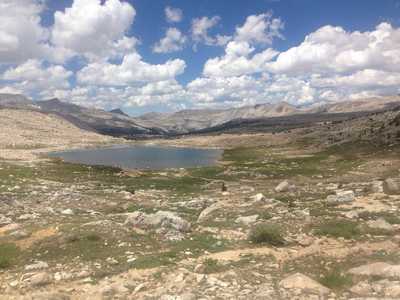 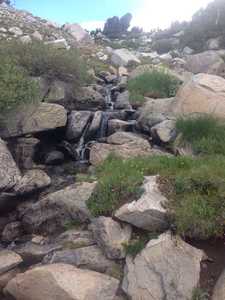 Bloody Mountain via Laurel Lakes Road and the Northeast Ridge