“One of the state park's oldest trails, with multiple connections through the foothills. ”

As the southern half of Blue Moon is a dead end to nowhere in particular, it is rarely used. However, this may change at some point in the future. The arroyo marking the end of the trail is near the property line of Fort Bliss's Castner Range, and the Army is expected to eventually pass ownership of the area to the city or State Park. When and if the property transfer happens, Blue Moon will be the main connecting trail between hundreds of acres of new park land and the existing trail system to the north.

The northern section of Blue Moon starts at Rockshock Road, just east of Sotol Forest and Scenic Road. There aren't any markers or cairns to denote the trail, but it is easy to make out the well-defined singletrack. Skip the section appearing to head north; it makes a short and difficult climb in and out of the canyon directly north before ending abruptly at the top.

Blue Moon is similar to the foothill trails it parallels to the west. Winding and gritty, there are fewer rocks to contend with compared to other Franklin Mountain routes. The trail is flat as it passes through knee high desert grasses. To the west, an excellent view of the red canyons cutting into the mountains can be had.

Some maps depict a trail marked as "Bad Road" near the half mile point. This is an old jeep road, which has long since become overgrown and is unnavigable a few hundred feet after leaving Blue Moon. Continuing on, sotols begin to grow up around the path and it reaches its smoothest section; enjoy it, as rock-free trail segments are a luxury in El Paso.

After passing Mad Cow and near the mile point, the trail zig zags and drops through an arroyo. Cyclists refer to this area as Deadman's Drop. Rocks make their way back onto the trail following the crossing. The next three quarters of a mile feature several intersections with other area trails. Many are marked with signs. Blue Moon stays mostly flat here, passing between hills and on the top of ridges. Mule Shoe is a fun, short diversion to the west, and another detour to the east on Cardiac Hill leads to a view of a natural stone arch.

South of Cardiac Hill's turnoff, Blue Moon is a dead end - for now, at least. The trail widens further to doubletrack and begins a steady climb. While the grade isn't bad, rockier portions and deeper gravel make it more challenging, particularly in gusts during the windy season. Signs marking the boundary of the Army's Castner Range are visible off to the left. A grassy area marks a brief respite in the climb, and the trail narrows.

Following a small washout crossing, Blue Moon makes its final climb. A hairpin takes the trail around a canyon; the view from here on the descent is outstanding. At the apex, two options are available. Spring View Spur continues the climb a bit further before ending on a lookout across from Mundys Gap trail. You can also continue on the final half mile of Blue Moon, which circles around another canyon before ending at a rocky arroyo. 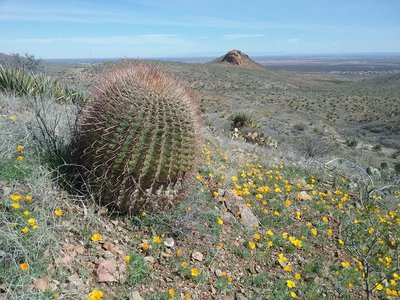 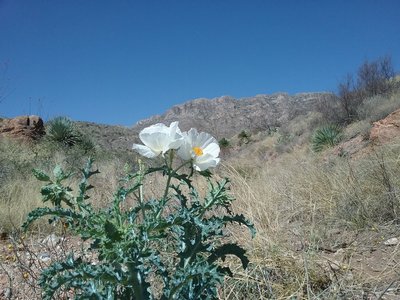 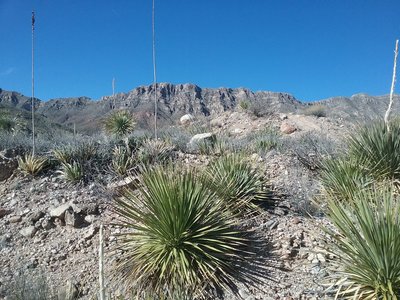 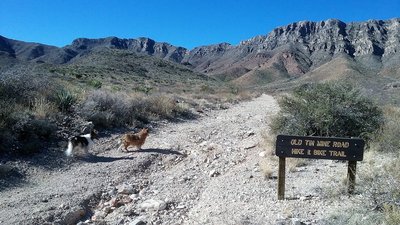 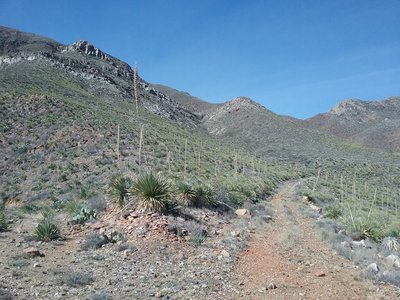