Sotol Forest's northern end starts at an intersection with Newman Trail, a few feet from a dry river bed. A sign marks the trail's beginning. The turnoff to Coyote Ugly is just across the riverbed and is unmarked, but easy to find. Sotol's singletrack continues southbound. The path is moderately technical and winding, but is a manageable run and doesn't feature any of the steep climbs of other foothill trails. When runners aren't dodging larger rocks, they'll find the trail gritty and sandy. All of these factors combine to make this a trail which is challenging to pick up speed on.

True to its name, Sotol Forest is surrounded by the sharp yuccas characteristic of the West Texas desert, along with lechugillas, cacti, and other plants. In some cases, they will grow out into the trail, so step cautiously - their leaves can be very sharp and sturdy.

Around the mile mark, the trail makes a short, easy climb to a nice viewpoint of the east side of El Paso. It then crosses an arroyo and cuts west, circling a scenic canyon. The last section is a little smoother than the first mile, but still features some rocky areas. Sotol Forest ends at a three-way intersection with Rock Shock and Scenic Road. Signs mark all three trails.

As the east side Franklin trails move from the desert to the foothills, a greater variety of plantlife can be found. Nowhere is this more apparent than on Sotol Forest, which cuts through hundreds of its namesake plants, along with several other types of desert flora. 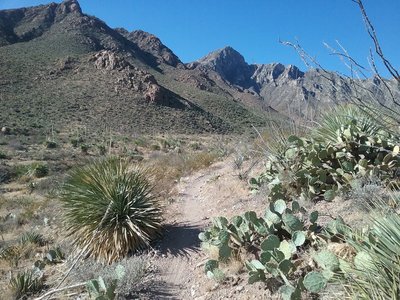 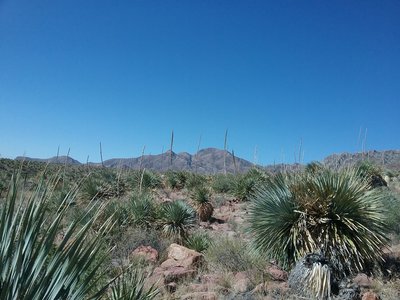