Tioga Pass Road is closed in winter, which may limit access to the trailhead.

Good even trail surface, less rocky than others in this area.

From the trailhead off Tioga Road, hike through dense forest before emerging into scenic Dana Meadows. Cover level ground, then hop or wade across a few streams. Depending on the season and snowpack, you may get wet! Climb a few short ridges with sporadic views of Mammoth Peak in between the trees. The high elevation of this trail is tough for un-acclimatized hikers, but it also means that wildflowers persist until late July. Ascend gradually, paralleling above Parker Pass Creek. At the Y-intersection, keep left, ignoring the trail to Spillway Lake.

Round the flank of Mount Gibbs and arrive at the intersection for the Parker Pass Trail. Stay left to remain on the Mono Pass Trail and soon arrive at the flat and windswept summit area. The Summit Lake Spur trail branches off to the right, take this short out-and-back detour for more vistas. There are many remnants of miners' log cabins from when silver was extracted from this area in the 1860's. Just as you approach Summit Lake is the official park boundary sign. Ahead of you is Bloody Canyon Trail leading down to Walker Lake.

A bit of history: Mono Pass Trail is an old path first used by Native Americans, then later "discovered" by an army lieutenant named Moore in 1852. He and his followers were chasing Yosemite's Chief Tenaya's group through Tuolumne Meadows and over Mono Pass. Apparently the army was not fast enough, they did not catch the band of Native Americans.

Deer and pine trees dot the landscape along this trail. 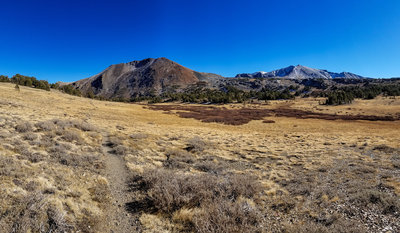 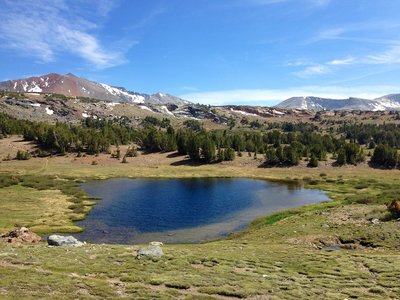 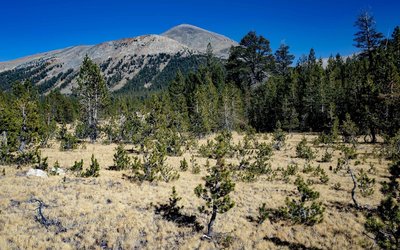 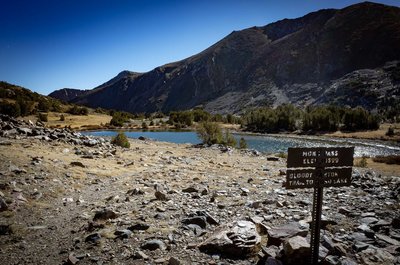