While short, the Thunderbird Viewpoint trail is steep, technical, and challenging.

Thunderstorms and low traffic have made the trail difficult to follow in some portions. Using GPS or the Trail Run Project mobile app to stay on track is an absolute must, as losing the path can lead very quickly into both aggressive desert plants and slippery loose rocks. Agave, cacti, and ocotillo all lean into the trail in some sections; count on picking up a least a few thorns along the way.

The Thunderbird Formation, one of the Franklin Mountains' most distinctive features, is a red rhyolite band on the west face of the range visible to a large section of El Paso. While many area businesses and organizations take their name from the formation and the legends surrounding it, few have experienced the unique view of the Thunderbird which can only be found at the top of this trail, elevated hundreds of feet above the neighborhoods below.

The trail splits off to the east from Thunderbird shortly after crossing an arroyo; it will continue along this runoff for about half a mile. The path is in reasonable condition in this initial section, with a few small sections of scree and plant overgrowth to manage. Halfway through, the trail crosses the arroyo twice, requiring some rock hopping.

From here on, the trail becomes more difficult. Shortly after the arroyo, the path climbs the mountainside and makes a sharp U-turn. The switchback portion here can be hard to see, so use the GPS track to help locate it. A large lechugilla and a number of prickly pears block travel further east, which can help.

Pay attention to the track as the trail climbs steeply up, weaving between ocotillos. It levels out onto a large, rocky outcropping. Continue two hundred feet further to the western end and the viewpoint. The Thunderbird Formation can be seen to the north, and views of the western suburbs spread out below. On clear days, the Juarez and Portillo Mountain ranges stretch for miles to the southwest and west. 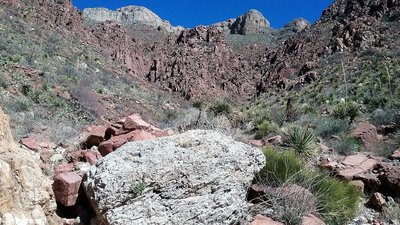 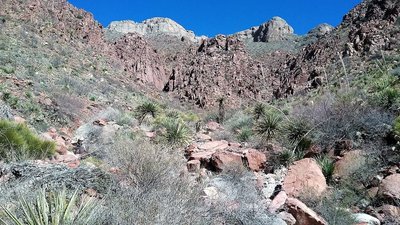