“An easy path that connects with the Valley Peak Trail, which itself has great views of Somes Sound. ”

This is a fine trail run and is easily recommended. Its general lack of foot traffic allows you to essentially keep up a continuous run rather than having to stop and start to navigate your way around multiple hikers. This trail, with all its pines, also provides you with some nice, highly breathable air.

Saint Sauveur hovers 679 feet over the southwestern edge of Somes Sound, one of Acadia’s major waterways. Somes, which many people still refer to as the East’s only fjord due to its steep and deep nature, is actually a “fjard” because it technically doesn’t meet the official scientific standards of a Scandinavian “fjord”. We embarked on this path late one day in order to access the Valley Peak Trail and get a clearer view of the sound; we chose this particular path because of its peaceful nature and due to the fact that it is not as well travelled as the other approaches to Valley Peak. For those who want a terrific look at Somes Sound (one of Acadia’s best bodies of water), this is a rewarding way to access it.

You can approach this trail from either the north or from the west (though this approach drops you off in the middle of the trail). The northern trailhead starts right at Route 102, just across the highway from the small Acadia Mountain parking lot. The western approach to the path is made via the Ledge Trail, also just off of Route 102 (but that path is located directly across from the Saint Sauveur Mountain parking lot). The Ledge Trail then meets up with the Saint Sauveur Trail at about its halfway point, just a little bit shy of the mountain’s summit. For those who want to simply rely on public transportation, there is also an Island Explorer bus stop at that same parking lot.

This trail is heavily wooded with lots of pines. It’s an easy to fairly moderate path that climbs to Saint Sauveur’s obscured summit, which then links up with the Valley Peak Trail. Many people choose to access Valley Peak from either the north via the Acadia Mountain Trail or from the south via the Flying Mountain Trail, but others find the Saint Sauveur path one of the best and most relaxing ways to link-up with the trail- we sure did.

Starting from the northeast trailhead, which you can access either off of Route 102 or the Man O' War Brook Fire Road, the trail climbs gradually through the forest in a southerly manner. At about 0.75 miles, you’ll run across the Ledge Trail coming in from the west. In another 0.2 miles, you’ll summit Saint Sauveur, and even though the top of the mountain is open to the sky, the trees that butt up against the summit cut off most of the view below. If you go another 0.1 miles, however, you run into the Valley Peak Trail, which will then take you to your great vistas of Somes Sound. 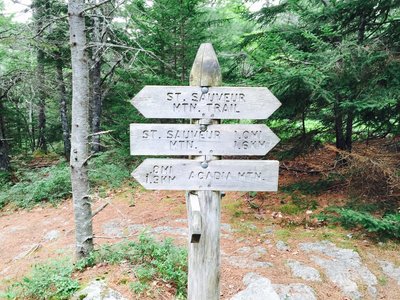