“A moderate, wooded, and pleasant trail on the mountain that sits roughly at Acadia’s midpoint. ”

This is a fine trail run and is highly recommended. Its lack of foot traffic allows you to essentially keep up a continuous run rather than having to stop and start to navigate your way around multiple hikers. This trail, with all its pines, also provides you with some nice, highly breathable, air.

Norumbega Mountain runs along the eastern side of Somes Sound and is located just north of the town of Northeast Harbor. At 852 feet, it definitely isn’t one of Acadia’s taller peaks, but it usually doesn’t have much foot traffic and offers a nice little jaunt in the woods with occasional glimpse of the park’s western mountains, as well as some of Acadia’s more towering eastern peaks. Many consider Norumbega to be the approximate midpoint of Mount Desert Island (MDI), and because of its central location, most people often overlook this peaceful and fun trail.

You can access this trail from either end. The north trailhead starts at the mountain’s summit, where it intersects with the Goat Trail, which is a short but steep climb up the eastern side of the mountain. You can reach the southern end of this path at the southwestern tip of Lower Hadlock Pond, where it intersects with the Hadlock Ponds Trail. The closest parking lot is located right at the start of the Goat Trail along Route 3, and if it fills up, people just park along the side of this relatively wide roadway. For those who want to ditch the car, there is an Island Explorer bus stop just at the eastern side of Lower Hadlock Pond, which isn’t far from the southern end of the path.

Norumbega is a moderate trail that is fairly wooded with lots of pines. It has roughly 650 feet of elevation change over its 1.3 mile length. At various spots along the path you’ll get some nice views of Somes Sound, which many still refer to as the East’s only fjord due to its steep and deep nature, but technically scientists have downgraded it to a fjard because it doesn’t measure up to all of the specific traits of a Scandinavian fjord. Whatever the case, Somes is one of Acadia’s most picturesque bodies of water, particularly on a sunny day. But don’t count on getting a full vista at the top of the mountain as vegetation obscures part of the view at the summit and along most of the trail. Still, we really enjoyed this trail because of its lack of other visitors and the great scent of pine trees along the way.

Overall, this trail is not Acadia’s most stunning path by any means. Nevertheless, it offers a great deal of solace and some occasionally pleasant views, not to mention an escape from the hubbub of several of the park’s other venues that are often overrun by tourists, particularly in the summer months. 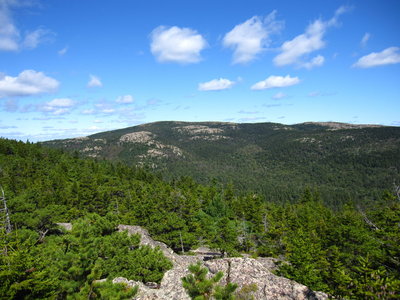