“A good trail climbing up and up following a river to a pass high above treeline. ”

This is the most frequently used of the trails in the Santa Barbara Divide. This trail provides the closest access to the Truchas Lakes from the north. No Fish Lake is located at the base of the Divide. Although the total elevation gains over 3,000 feet, the climb is fairly gradual.

There are some rocky sections, but mostly the trail is fabulous singletrack with some river crossings where you might get your feet wet.

From the Santa Barbara campground, park in the parking at the entrance of the campground and run through to the far end of the loop where the trail starts. Follow this nice wide singletrack into the forest along the river. Enjoy the cliffs looming on both sides as you climb the gradual trail ever higher.

About 3 miles up the canyon on Trail #24, you'll encounter the turnoff to Trail #25. At this point the canyon branches with the Middle Fork and West Fork of the Rio Santa Barbara. The West Fork Trail continues up the canyon which broadens into a large open meadow, where a magnificent array of wildflowers can be seen during July and August. As you continue traveling south on Trail #25, the canyon gradually narrows again. The trail crosses to the west side of the river about 3 miles from the Middle Fork turnoff and the trail begins to ascend high above the river in a series of long gentle switchbacks.

At about 6 miles in, you'll cross a big meadow with views of the peaks you are headed for. Enjoy the open space but keep an eye on the herds of cows likely to be grazing on the lush green grass.

The trail starts to climb more steeply switchbacking up the right side of the valley. Eventually, you'll reach the saddle between North Truchas and Chmayosos Peaks. Soak up the view.

Chimayosos Peaks dominates the view to the northeast as the trail continues to climb up the canyon. No Fish Lake (11,600) can be seen along the trail just before the final ascent to the Santa Barbara Divide (12,000). This shallow lake will not support fish since it freezes solid during the winter months. It is located well below the main trail. If you wish to see it be alert and watch for the turn off as you travel up the canyon. Camping is prohibited within 300 of all lakes. The divide is also the Carson/Santa Fe National Forest boundary. Trail #25 continues to the south onto the Santa Fe to Skyline Trail #251 and Truchas Lakes (2.2 miles). 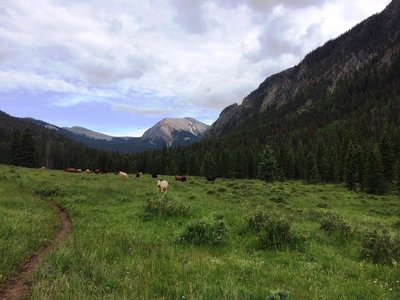 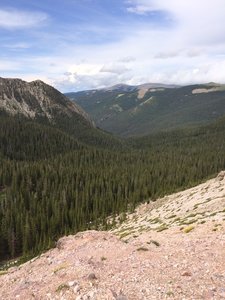