“A rigorous approach into the Wilsons. ”

In the winter the road to Rock of Ages Trailhead is usually closed about 4 miles below the summer lot.

Horses are prohibited on the road portions of this approach, as this is private property. Dogs must be leashed, but remember the mountains accessed by this trail are not Fido-friendly.

Most of this trail is actually fairly runnable, with few rocks and low grades up until the talus field past the ruins. That said, the running stops far below any significant vista, and there are many better alternatives in the area.

From Ridgway, take CO 62 toward Telluride. Pass over Dallas Divide and into Placerville, turning left onto CO 145. Drive 6.5 miles and turn onto the Silver Pick Road (easy 4WD dirt; high clearance 2WD should suffice). Drive 4 miles to an intersection and bear right onto FR 622 (this is the standard winter closure). Drive 2.2 miles and bear right again, this time onto FR 645. Cross a small stream in about a mile (hardly noticeable in the summer) and continue one more mile to the Rock of Ages Trailhead at 10,300 ft.

From the trailhead, run south on the Rock of Ages Trail, marked Trail #429. Shortly after leaving, stay left at a junction. Pass the gate and stay on the larger trail, which is wide and makes for easy running. In about a mile come to some talus and follow a large switchback to the left, coming into Silver Pick Basin at 11,400 ft. Continue to follow the road-like trail, coming across the occasional sign. Pass some small hills in the basin, after which the Rock of Ages Saddle (13,200 ft) will come into view. Wilson Peak is to its left, with Navajo Lake Trail on the other side of the slope, and an unnamed 13er to the right.

Continue to follow the roads until you come to a very unclear trail just over 3 miles in, practically invisible if not for its signs, at 12,100 ft. Leave the road and run up the talus to the right. Once you find the trail (Rock of Ages - Vague Ascent Trail) it's not incredibly hard to follow, but consists almost entirely of talus, with the occasional stone step. Follow the trail up and to the left, passing above the ruins of an old stone house. Continue to traverse the talus, heading southeast and up to reach the Rock of Ages Saddle. Wilson Peak Trail will be to the left, with access to other 14ers via Navajo Lake Trail down the other side of the saddle.

Should you descend this trail, as recommended by the Wilson Group featured run, you'll have a very difficult time finding the trail on the talus. It's tempting to simply descend the talus field down to the ruins of the stone house, but beware the loose rocks. If you wind up at the stone house, just follow the roads near it back to the trail junction (12,100 ft) mentioned above. Fortunately, as long as those descending out of Silver Pick Basin stay down and to the left, they will be funneled onto the right route.

Expect vivid wildflowers down low, with marmots and pika up high. You may also encounter wolverines near the 13,200 ft saddle. 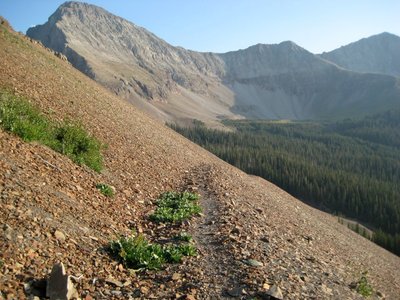