“A fun scramble up 14er, Sunlight Peak, with some terror-inducing exposure. ”

Unless you feel like carrying your dog, you should probably leave them at camp/home.

While you could run the first quarter mile of this trail, it gets steep, rocky, and you'll be scrambling almost immediately. Running is not recommended.

While most of the scrambling on this trail isn't anything special, Sunlight Peak's summit block boasts the single most committing and exposed move on any Colorado 14er standard route. Some 14er "finishers" haven't even climbed the true summit block and are totally okay with it. This author will keep his opinion to himself.

From Twin Lakes Approach, run east (right) on fairly flat alpine tundra. In about 0.2 miles come to a headwall at 12,600 ft separating the sub-basins of Sunlight and Windom Peak. From here the trail is unclear, but the route is generally well-cairned. Run up the left side of the headwall to come to a sub-basin around 13,000 ft at the bottom of Sunlight and Windom. Sunlight is the peak to your left, while Windom Peak is to the right.

You should be able to see a saddle between Sunlight Peak and Sunlight Spire, a 13,999 ft tower with a 5.11 trad crack route. Run up talus and slick rock to a gully leading up to the saddle at 13,700 ft. Traverse loose rocks and gravel in the gully before turning left at the saddle onto solid class 3 rock. When the route's wet, the geology makes for a slippery scramble, so exercise caution. Come out of the gully and up to a well-cairned notch in the rock. From here, head up and to the right, traversing underneath some small cliff bands to your right. When the cliff bands break, run a few feet down to the left before coming to a steep rock slab about 10-15 ft high to your right. Scramble up this and come to a rock chimney. Pass through the hole in the rock (sorry, claustrophobics), and turn left. From here it's just a short way to the summit. Talus hop to the infamous summit block at 14,000 ft.

This bit is extremely exposed, and a fall would almost certainly prove fatal. Scramble up slabs to your left, traversing to the right. From here, jump forward to the next rock, and then up and to the left. The best way down from here may be to jump from rock to rock. Again, be careful - this is the most exposed move on any Colorado 14er standard route.

From here, descend and traverse over to Windom Peak, or head back to the end of the Twin Lakes Approach for the Eolus Group or to return to camp.

Up this high, there's not much other than marmots and pika. The wildflowers fade out at the lower portions of the trail. 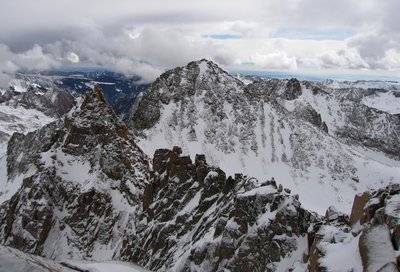 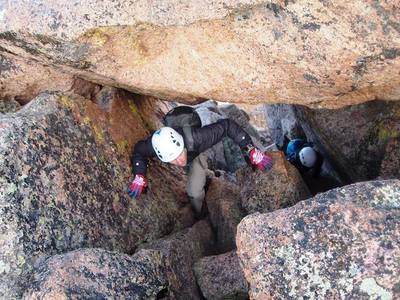 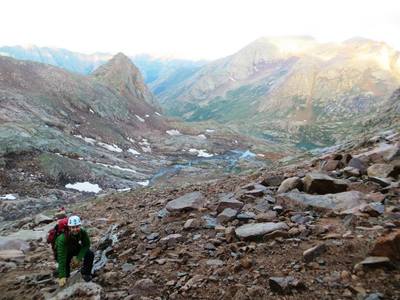 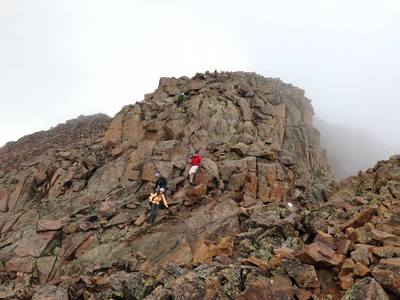 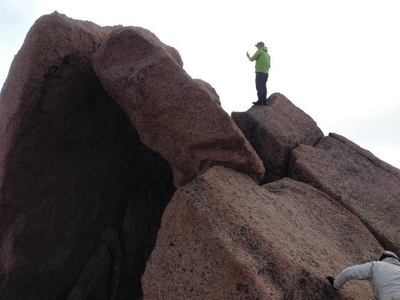 Engineer Mountain Out and Back