“This is one of the most scenic and peaceful pathways one can experience! ” The Lake Almanor Recreation Trail is closed to all motorized traffic and saddle or pack stock.

This multi-use trail winds through beautiful stands of stately pines, firs and incense cedar, as well as meadows, a campground, a summer home tract and several lakeshore areas. There are many places along the trail to take a swim or throw in a line. The trail is ten feet wide and has a paved surface. It is open to hikers and non-motorized vehicles, including bicycles and inline skates.

Spectacular views of Lake Almanor, Dyer Mountain and Lassen Volcanic National Park can be found year round along the entire route. This trail follows the contours of the west side of Lake Almanor.

Opportunities abound for summer fun at Lake Almanor. Several good spots for shore fishing can be found along the mail and nearby resorts have boats for rent if you would like to try deeper waters. Many of the beaches and coves are excellent swimming areas for young children (there are no lifeguards on duty). Some of the best wildlife viewing in the Lake Almanor basin can be found here.

Lake Almanor was created in 1914 as a hydroelectric facility by the Great Western Power Company. The name"Almanor" originated by combining the names of three sisters, Alice, Martha, and Elinore, daughters of Guy C. Earl, Vice President. The Great Western Power Company later became part of Pacific Gas and Electric Company (PG&E) who developed Lake Almanor into a recreation area. The lake rests at an elevation of 4,500 feet, is thirteen miles long and six miles wide, and is approximately 90 feet deep at its deepest point (when the lake is full). The present dam was constructed in 1926, 1927, stores 1,308,000 acre feet of water and covers over 28,000 acres of land.

Ospreys and Bald Eagles are frequently seen from the west shore. Often eagles "rob" ospreys or other wildlife of their meals. A favorite hunting method is from a perch tree, with the eagle flying out to capture the prey when sighted. Ospreys hunt from the air frequently hovering for several moments before plunging into the water. 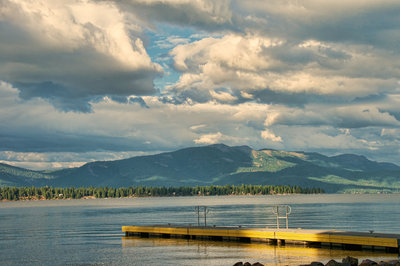