“A beautiful and rewarding route to the summit of an iconic Colorado peak. ”

No pets on trails. Fires and camping in designated areas only.

Iconic Longs Peak (14,259') is the highest mountain in Rocky Mountain National Park, Colorado's 15th highest summit, and the northern most 14,000' peak in the Rocky Mountains. There are many spectacular ways to summit Long's Peak, and this description highlights the "standard" Keyhole Route. The route has two sides to it, a long but pleasant trail with a little scramble to the keyhole, and from the keyhole to the summit which is rated as a Class 3 Grade 3 scramble/climb.

Arrive early, this is a long trek. The "average" start time is 3AM or earlier for a summit bid. Lightning is a real threat so plan to summit no later than noon to avoid afternoon thunderstorms. Anticipate 10-15 hours to complete the trek. Do not underestimate the route beyond the Keyhole, it crosses steep cliffs, narrow ledges, and loose rock. Bring plenty of water - length of trip, elevation gain, time above treeline all contribute a need for recommending 4 liters min.

Summer conditions are short lived - "usually" mid-July-September but Winter conditions can exist any time of year - prepare accordingly. A trip or fall on the upper portion of the route can be fatal.

The standard route on Longs Peak is called the Keyhole route and it is usually done in one very long day. It is the route described below.

From the East Longs Peak trailhead follow the well maintained trail through pine forests. You reach a trail junction to Eugenia Mine Trail/Storm Pass after 0.45 miles. Continue straight along the East Longs Peak trail as it turns southwest through dense forest, gaining elevation through steep switchbacks. As the trail turns west, you pass through Goblins Forest, 1.1 miles in, and cross small creeks before climbing more switchbacks. As you approach treeline, you cross beautiful Alpine Brook on a well maintained footbridge, 1.85 miles in.

Leaving Alpine Brook the trail travels south through krummholtz and provides beautiful views of Twin Sisters Peaks to the east. The trail eventually leaves the low growth stands of krummholtz behind and enters alpine tundra, providing spectacular views of Longs Peak Diamond, a 1,000' sheer cliff. The trail moderately climbs until it reaches Jims Grove Trail Junction, and then turns southwest along the basin until it arrives at Mills Moraine.

From the end of the East Longs Peak trail, the next destination is the Keyhole (.4 miles) to the southwest across the Boulderfield. The Keyhole is a weakness in the ridge between Longs Peak and Storm Peak, providing the only non-technical passage to the west side of the mountain along this route.

Scramble across large granite boulders until close to the keyhole, where the last 100 yards become increasingly steep. The Keyhole is a striking rock feature with a large overhang and a rock shelter built along the southeast side. Stepping through the Keyhole is one of the major highlights of the trip. The spectacular Glacier Gorge with its beautiful lakes and 13,000' peaks come into view along with a 3,000' drop. The exposure feels big, and some decide that the Keyhole is far enough. Knowing when to stop is honored wisdom. The way forward from here is much more rugged and dangerous than what has been encountered so far and marked with bullseyes.

Once across the Keyhole, turn immediately to the (left) and locate "The Ledges" (0.4 miles, 120' elev. gain), a horizontal route marked by red and yellow bullseyes. The Ledges gradually head south, up and down over the tops of massive slabs of granite that rise from the side of the mountain. There is a v-shaped notch between boulders, with an iron rod as an aid through the most difficult section.

Next, the Trough (0.3 miles, 600' elev. gain) consists of moderately steep, rock-filled gulley. At the top there is a large boulder jammed between the walls of the Trough as it narrows, blocking the route. Getting around it is one of the most difficult parts of the route, though there is no serious exposure.

At the top of the Trough there is a narrow ledge called The Narrows (0.2 miles, 120' elevation gain) providing a route across the near shear south face of the mountain. The ledge is fairly narrow initially, giving this portion of the route its name, but never less than 3' wide.

The Homestretch (0.2 miles, 280' elev. gain) is the last obstacle to the summit, and consists of a Class 3 slope of exposed granite, steep enough to require scrambling on all fours. It is climbed north-northeast to the top of the mountain. A large cairn marks the gateway to the top. The large flat summit is covered with rough talus. Enjoy the incredible views! 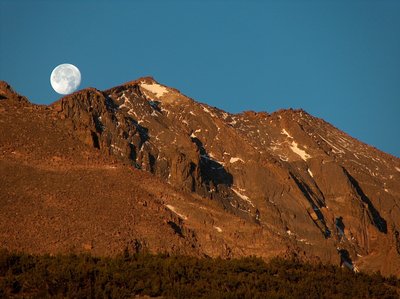 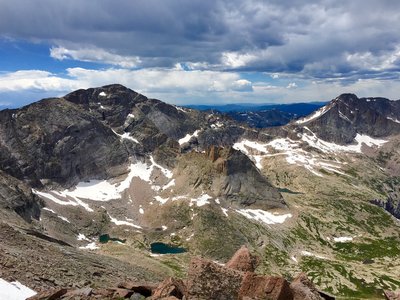 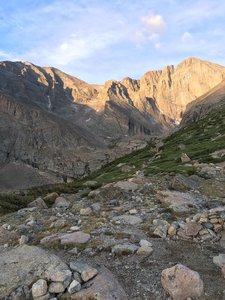