History buffs and naturalists alike won't want to miss a trip to the Tocks Island Dam Site. In the 1950's and 1960's, a series of floods prompted Congress to examine a variety of plans to regulate the flow if the Delaware River. Among the options was an Army Corps of Engineers study and plan to construct a dam in the river basin. It was thought that by controlling the waters of the river, flooding would no longer be an issue and that residents of the area might be spared the wrath of extreme weather.

The dam site was originally slated at the tip of Tocks Island. Construction would have created a 40-mile long lake, with a maximum width of approximately one mile. Nearly 600 permanent residents of the area were relocated, many of whom had moved unwillingly. The outcry from the former residents of the area combined with the devastating environmental effect caused the dam proposal to be shelved in the 1970's, and fully decommissioned in 1992.

Today, the southern tip of Tocks Island appears much as it always has through the ages. Protected by the National Parks Service, the island, and the 40 miles of river behind it, have become an enduring symbol of cooperation between government, citizens, and wilderness.

Taking the time to visit the area and to admire the surrounding scenery is a powerful testament to the value of untouched natural spaces.

Short Walk: Visitors can view the area from their vehicles on Old Mine Road, and can also reach the location via the McDade Recreational Trail. 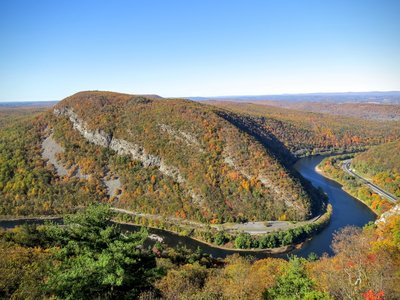