Bogus Brook Preserve, formerly known as the Gibson Tract, was purchased with state and federal assistance in 1975. The preserve takes its name from Bogus Mountain Brook, which flows from Danbury into Redding, through the preserve, and is a tributary of the Saugatuck River. The Metro-North/Danbury-Norwalk rail line traces the preserve’s southern boundary. The trails system was designed in 1984 by James Ellsworth.

As the visitor soon discovers, the principal feature of this preserve is an extensive swamp distinguished by sedge and cattail and the standing relics of drowned trees. Over the years, beavers have taken the blame for highwater here, as though their dams were somehow higher and less porous than Metro-North’s. A bum rap, we say. Let’s hear it for beavers! And hope they’ll be back before many a day. Meantime, the best place to view trailside evidence of their past activity here is along the Beaver Point Trail and the Bogus Trail where it skirts the swamp.

Bird-watching at Bogus Swamp can get pretty lively at certain times of the year. Pick a spot with a view and hunker down with a pair of binoculars. You just might add an entry or two to your life-list.

As for the uplands, they harbor the typical mixed hardwood fare: oaks, hickories, maples, tulip poplars. "A stroller’s woods," someone has called it. 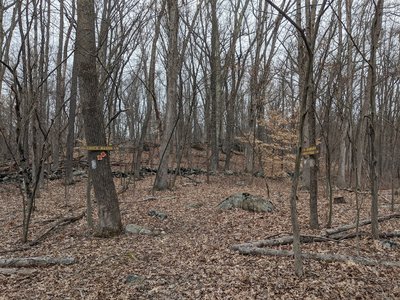 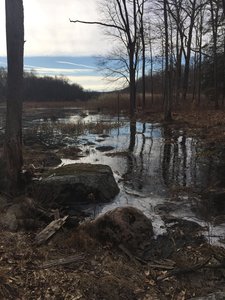