It appears a microburst affected the area somewhat recently as the trail past Hollowtop Lake is heavily obscured with downfall. Access was much easier to Deep Lake by going around the south side of Hollowtop Lake, but will require some trail finding and moderate bushwacking or tree hopping between Hollowtop and Deep Lake

As a casual weekend warrior, this trail was a nice moderate jaunt to relax by and explore a few alpine lakes. Deep lake proved elusive with the extensive downfall and old trail data. After several attempts and many pleasant surprises (such as unexpected alpine meadows), we managed to discover Deep lake and a little bit of solitude. Either Deep or Hollowtop Lake serves as a great basecamp to explore more in the area such Skytop Lake or bagging Hollowtop Mountain (10,552 ft). I recommend the easy jaunt up to Hollowtop if your looking for a moderately challenging escape and some decent fishing or if you need a launchpad for some next level adventuring.

The first thing that might be worth noting is that the beginning of the trail is mixed-use with bikers, ATVers, hikers, and horseback riders sharing the trail. As you get further up (about 1.5 miles in), offroad use becomes limited to two-wheel motorcycles up to the lake. On the way up to the lakes, you'll start off on a wide trail in and out of tree cover. Once you reach the trail junction about 1.5 miles up, you'll stay right, not crossing the creek. After a few hundred yards you'll have to go through a barbed-wire fence by unlatching and relatching the gate. Shortly after the gate, you get into the steeper climbs which aren't too bad but combined with the open exposed areas, it will heat you up quickly especially with a loaded pack. I recommend making sure to take a moment to look back down the valley towards Pony!

Another 1.25 miles up you'll run into your next trail junction. Again you'll stay right. Above this junction, It's not terribly steep but it's very rocky and rutted out probably due to poor drainage. As you get closer to the SE end of Hollowtop Lake, you'll join back up with a creek and follow that to the edge of the lake. There are many camping options around this lake.

The real adventure starts on the way to Deep Lake. You'll want to follow the trail around the west side of Hollowtop lake. We first attempted the east side trail, but I think the microburst buried the old trail and after much bushwhacking and getting into some thick downfall, we ended up deciding to try again the next day on the west side. Just past the last campfire ring along Hollowtop Lake and the trail starts to trend away from the lake keep your eyes out for a small creek crossing with logs bridging the gap. It's easy to miss. If you find yourself going up a decently steep and eroded hill you've gone too far and you'll end up in a meadow and have to backtrack. Once you cross the creek you start to work your way through the downfall. Much of the first portion is cut out, but it can be easy to lose the trail as you get further down it. Expect to bushwack or trail find at times. I would recommend bringing a tool to help keep you oriented. I used a downloaded map from onXmaps, but you could also use the nearby peaks as a reference point when you can't see the lakes. The elevation gain between Howllowtop and Deep lake is not significant and there were no sections that I would really call steep. It's a pretty easy jaunt just over the small ridge and well worth the little extra effort and adventure. There were also several campsites and seemed like a great way to get a little extra solitude with just a little more effort. The trail to Deep lake didn't seem nearly as accessible for motorcycles, and I could imagine it being much more difficult to reach during the melting season. 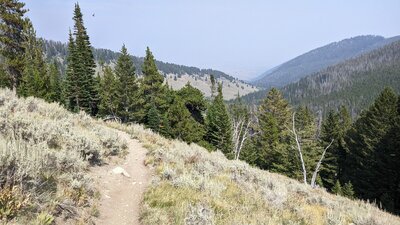 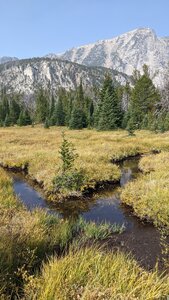 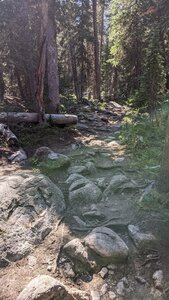 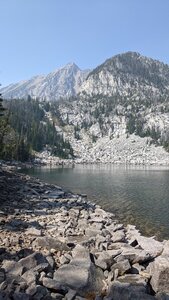