“Combined with the Fish Creek Trail, this is the easiest route to San Gorgonio, with great views on a clear day. ”

Permit required for both day and overnight trips. Permits should be readily available for the Fish Creek Trail, because it is only lightly traveled. Normally it would be harder to get permits for the South Fork Trail, but in 2021, because of COVID-19 and the 2020 fires, most days are still available.

The Fish Creek trailhead is 1100 feet higher than the South Fork trailhead and 1900 feet higher than the Vivian Creek trailhead. The combined mileage for the Fish Creek and Sky High trails is about the same as the other two approaches, but the total climb is only 3,550 feet, compared to 4,570 for the South Fork trail and 6,095 feet for the Vivian Creek Trail. Alternatively, the Sky High trail could be combined with the South Fork and Dry Lake trails to make a great loop run over the top of San Gorgonio.

From Mineshaft Saddle, the Sky High Trail traverses and gradually climbs the southeast side of San Gorgonio. At 1.0 mile the trails passes the wreckage from an Air Force Douglas C-47 transport plane that crashed in 1952. Over the last 70 years, snow run-off, avalanches, and scavengers have removed a lot of the wreckage, but there are large pieces of the wings and parts of the fuselage on both sides of the trail. A memorial plaque commemorates the 13 airmen who died in the wreck. Several smaller planes have crashed into San Gorgonio, but this is the largest and easiest to visit wreckage.

Shortly after the wreckage, the trail begins to switchback up the steep, east ridge of San Gorgonio. Even in mid-May during an extremely dry year, there were still a couple of narrow, but very steep, snow fields to cross. When there is more snow, crossing these fields could be treacherous without an ice axe and crampons.

At 11,000 feet, the switchbacks end and the trail traverses the south side of San Gorgonio and gradually climbs to the trail junction with the other approaches at 11,360 feet. From there, it is only a short distance to the summit.

On a normal day on the Sky High Trail, there will be views of the local ridges, tarns and peaks, San Jacinto Mtn, Joshua Tree National Park, and the Palm Springs/Thousand Palms area. On a very clear day the views would be incredible. From 11,000 feet, the level horizon is over 100 miles away, with peaks at a considerable greater distance appearing over the horizon. You would be able to see the entire Coachella Valley (Palm Springs to Indio) and most of the Salton Sea. 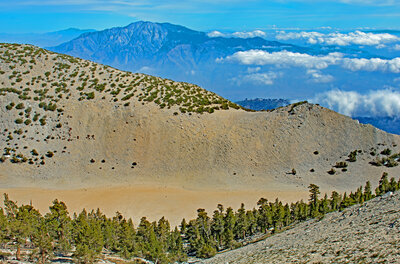