3.5 (2)
Plan with onX Backcountry
Previous Next 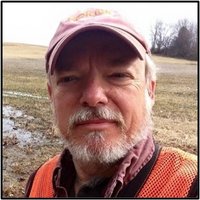 This a loop run making use of an unimproved gravel road, the Appalachian Trail and the War Spur Branch Connector over some of the higher elevations of Potts and Salt Pond Mountains.

The run along the road is mostly uphill, becoming notably steeper in the last third mile as you ascend Minie Ball Hill. At the crest there will be a clearing/parking area on the left which represents the trailhead for the Appalachian Trail (AT) which crosses there. Follow the AT to the right (East).

After approximately one quarter mile come to Wind Rock on your left, with an expansive view from Potts Mountain looking to the North. This is the highest point along the loop. Continue along the AT for another 3.7 miles until reaching Lone Pine Peak, the second highest point of the loop run. There are no views from the summit of Lone Pine Peak.

Wind Rock is a great place to observe hawk migrations during the Fall. There is a small scattering of Red Spruce (Picea rubra) at the summit of Lone Pine Peak. Red Spruce is a northern tree making its way down the Appalachians in the higher elevations. It might be missed among the pines and hemlocks to the casual observer.

Minie Ball Hill (on the left as you ascend the steepest part of Mountain Lake Road) gets its name from the minie balls (Civil War era bullets) and other supplies that were abandoned there due to the strenuous haul as Union General George Crook marched his troops over Salt Pond Mountain in 1864, after the battle of Dublin during the American Civil War, headed to Union, West Virginia. 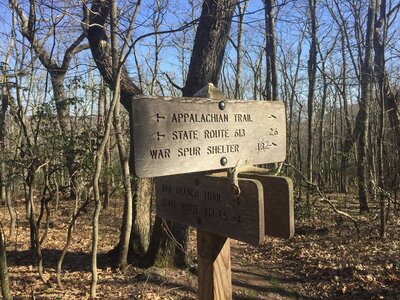 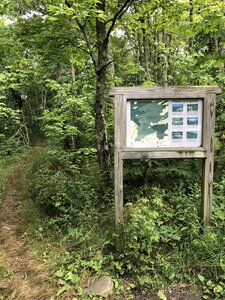 Kelly Knob Out and Back