“Amazing loop with some of the best southeast cliff views and a frolicking descent down the final stretch. ”

If doing counter-clockwise, access at the bottom to Green Ridge is an old forestry gate. It has "No Trespassing" signs, but it is a legit` forestry road (FR3509) with public access(fs.usda.gov/recarea/nfsnc/r…) leading to the trail. It is a case of a grumpy property owner not liking people using that access.

The loop connects the Jerry Miller trail, the AT, and the Green Ridge Trail, to form a wonderful and remote frolic in the woods. A spur trail will take you to the best cliff viewing I've seen in the Southeast. The views from the AT are frequent and memorable, and this finishes with a hard to find, but well worth it, descent down Green Ridge trail through an isolated cove. You won't see many people (likely anyone) with the exception of the AT stretch.

There is a surprising lack of water along this loop. Some in the beginning, on the Jerry Miller trail and some at the end, on the Green Ridge trail, but nothing in between. Plan accordingly if it is a hot day and also be mindful of this if bringing the pups. We went on a cool and rainy day and luckily my friends pups found some water in a rock that they slurped up.

The stretch down Green Ridge is well blazed, once you find it, but is not well maintained. If is a great run down with some of the softest dirt I've found out here and a great sense of remoteness, but there will be downed branches and trees to navigate and you may need to use some route finding skills, and conjunction with the TRP app, to find the trail. Once you do and you see the blazes, you'll be golden.

This trail starts at the open area (used for parking and some overnight camping). There is a signpost marking the start of the trail. Look for a turnoff of the access road to the left using the TRP app or google.

The Jerry Miller is a consistent, mellow grade, climbing up to the AT. It is not heavily used (we were there on a weekend in early Oct and saw no one). There is nothing spectacular about the trail. What makes it such a great trail is that you'll have it all to yourself, that it can be used, with the AT and the Green Ridge trail to form an amazing loop, and that at the top of this trail there is a spur trail leading to some amazing cliff views. This trail, the Baxter Cliff spur trail, is marked by a half broken sign. It is well worth the extra work to get to that view.

Just after the spur trail the Jerry Miller trail connects with the AT. This stretch of the AT follows a ridgeline and offers some amazing views, both into TN and NC. Stretches are pretty rugged and challenging, but it is a great and less populated stretch.

A sign will point to a grave site toward the end of the AT stretch. The site is flat area that through runners use for camping. This, however, is where it gets tricky to find the Green Ridge Trail. We continued down the old forest road, that was used as the AT before a proper trail was built, and we had trouble finding the Green Ridge Trail access, using the Trail Run Project mobile app and GPS as a guide. Perhaps if we went to the proper AT there would have been a sign, but either way the trail would need to cross the old AT/forest road to head south.

We essentially started to bushwhack, as the concept of heading back to the Fork Ridge Trail, to get back to our car, didn't sound appealing. It was clear where we needed to head. It just wasn't clear if we would find the trail. It would seem we weren't the first to have this issue as we did soon find a footpath, after heading toward green knob, and that soon took us to the trail with its blazes. Stop and enjoy an amazing view from the knob. It was a rainy day when we were there and the clouds were all low in the valleys, with the peaks, covered in fall foliage rising up above those clouds, looking like islands in a vast sea. It was spectacular! Once we found that, the way was clear and obvious.

From that point, the trail climbs up and around Green Knob before dropping around the other side into a cove. The blazes are consistent and the switchbacks obvious. The trail is soft and the creek provides a great soundtrack. It has a remote and isolated feel, but the forest is absolutely spectacular through this stretch. It was one of my favorite stretches I've found in this region.

I am sure there is plenty of history here. I know none of it. Please share if you know it. 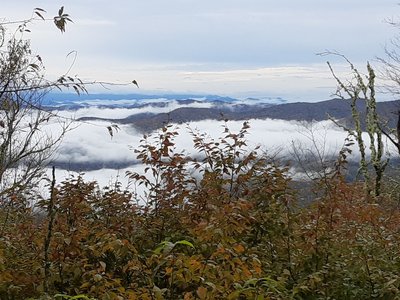 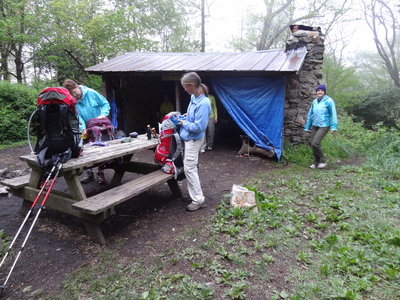 Quest For The Crest 50K

Quest For The Crest 10K