“Rails-to-trails following the Genesee River from just south of Rochester to Mount Morris. ”

Restrooms are occasionally located at parking areas or in parks along the Greenway. No fees are charged to park or use this part of the greenway. Note that you can't park at Genesee Junction; you'll need to park at the Brookdale Preserve and travel north to get to Genesee Junction.

The Genesee Valley Greenway is a rails-to-trails following the old Genesee Valley Canal and the Western New York & Pennsylvania Railroad. It is a work-in-progress, currently connecting Rochester, New York, to Black Creek, New York, with plans to extend the trail to Cuba, New York, and possibly Hinsdale, New York. It is managed by the New York State Park system.

This section begins at Genesee Junction, the site of an old turntable, near the live rail line south of the airport in Rochester, New York. The Greenway crosses over Black Creek via the stone bridge built for the railway and heads south, passing by the Brookdale Preserve to the west. Pass old locks from the Genesee Valley Canal about mile 3.0.

At mile 5.0, the trail passes under I-90; 2 miles later, the trail crosses Oatka Creek in Canawaugus Park. About mile 9.2, pass the Lehigh Valley Trail and an old rail bridge over the Genesee River. The rail line ran over the Western New York and Pennsylvania Railroad at this point, so you'll pass between the stone pillars that once held up the trestle. Continuing southward, the trail passes fields and forests to York Landing about mile 21.2. 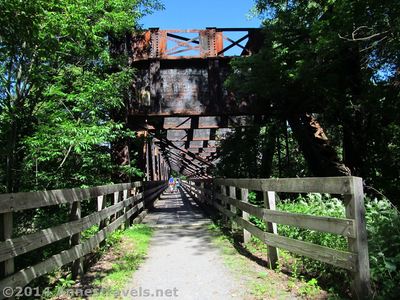 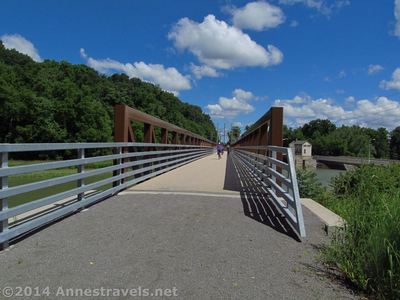