“A strenuous but rewarding climb up ~6,000 foot Bear Point and back. ”

This trail is currently closed: fs.usda.gov/recarea/willame…

New for 2021, trails in Mt. Jefferson, Mt. Washington, and Three Sisters Wilderness Areas will require a Central Cascades Wilderness Permit for overnight use and some will require one for day-use.

This is a steady and well built trail to the top of Bear Point and back. It is technically very easy - no scrambling is required at all. You'll be rewarded with exceptional views of Jefferson and everything from Mt Rainier to Diamond Peak on a clear day. This is a relatively lightly trafficked route considering the quality of views and ease of access.

The parking area off NF-4685 has room for a lot of cars, has a small kiosk with information, and a wilderness self-registry box. NF-4685 is gravel but in excellent shape aside from the occasional pothole so any car should be able to make it. Check the USFS website about permits for this route starting in 2021.

From the parking area the trail heads east and almost immediately splits off from Crag Trail #3364 - keep to the left. The first mile and half or so is straightforward enough through lush forest on a well built and maintained trail. You'll gain elevation steadily at a pleasant rate and have to cross multiple creeks. Some of these creeks require a little footwork earlier in the year but should be easy enough to cross with dry feet. You'll cross a slightly larger spring-fed creek after 1.5 miles and encounter a clear switchback at 1.6 or so miles. After this the trail gets rockier and the forest noticeably changes. In less than half a mile from this switchback (at about the 2 mile mark) you'll come to the clearly signed intersection with Bear Point Trail #3342.

Head north on Bear Point Trail #3342 over a few small creeks, past a talus field, and to the first switchbacks at about a half mile (2.5 total). From here on the route will get steeper and consists mostly of rocky switchbacks as you ascend straight up the south face of Bear Point. Shortly after the switchbacks start the views also start. Jefferson will dominate views to the southeast with Three Finger Jack, Mount Washington, and the Sisters coming into view as you ascend. The great views are a result of thin tree-cover so be mindful that you'll be very sun-exposed too. Eventually the switchbacks straighten out and wrap around to the north side of Bear Point for the final push. This section can have snow later in the year.

The summit of Bear Point offers 360 degree views that are more than worthy of the nearly 3,000 foot climb, but it's Mount Jefferson that steals the show! The summit is broad with room to relax, but very rocky. Not much remains of the old fire watchtower that once stood here. Return the same way you came.

Plenty of Rhododendrons in June.

A fire watch tower once stood on top of Bear Point, but little remains of it now. 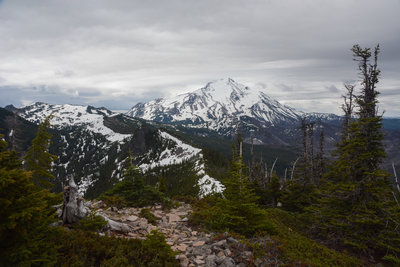 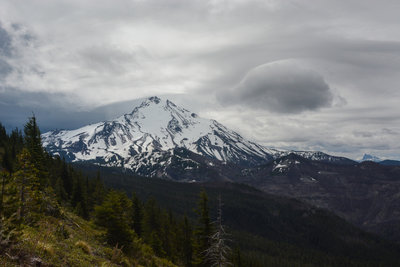 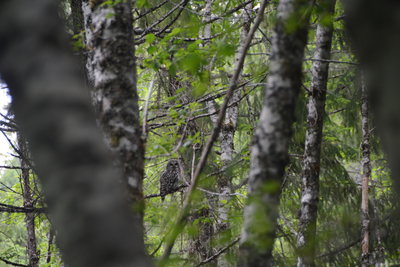 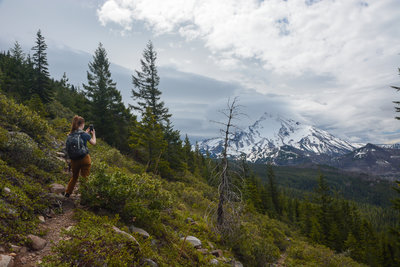