“A good run for late spring to an isolated alpine lake with views of the surrounding ridges. ”

In the summer, only portable stoves and lanterns are allowed outside of designated campsites. A campfire permit is required.

Dispersed camping (no facilities) is allowed along Forest Rte 26. No fires are allowed.

From the end of Gray Rock Lake Trail, the Upper Gray Rock Lake Trail continues around the lake, crossing the fairly small outlet stream. About half way around the eastern shore, the trail makes an abrupt left to climb steeply up through the bushes. If you miss this turn, the trail along the shore becomes heavily overgrown about 30 yards beyond, which should be a signal to go back and look for it. The upper lake trail traverses up the rim of the cirque for less than two hundred yards and then crosses over to its eastern side. At that point a small, unmarked path leads down to Timber Lake.

About this point, a new trail splits off from the old Upper Gray Rock Lake Trail. The old trail stays on the lake side of the cirque, while the new trail traverses up the eastern side, in order to avoid the snow that lingers on the old trail. I didn't even see the old trail, either because of the snow or because it is overgrown. Even with no snow, if you look at the two trails on Google Earth, the new trail is much more visible than the old one.

The new trail appears to have begun as a trail of use. It is narrow, rough, and steep, but there are no dangerous exposures. It traverses up the eastern side of the cirque rim and then abruptly turns right to climb steeply up to the top. Along this section there are good views of the lower Gray Rock Lake and the surrounding mountains.

From the top of the ridge, the trail drops a few feet in elevation to pass a small pond. At the pond, look back and remember where the path that comes down, because it is easily missed on the return. From the pond, it is an easy run up an obvious path to Upper Gray Rock Lake.

In contrast to the profusion of flowers found in nearby parks such as Marble Mountain, the Russian Wilderness, or Mt. Shasta, I did not see a single flower above 3000 feet anywhere along or above the South Fork of the Sacramento River. 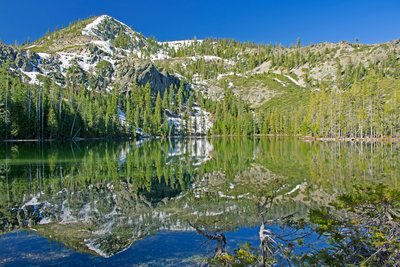 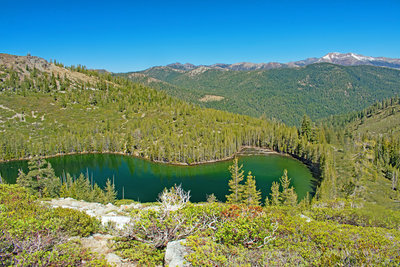 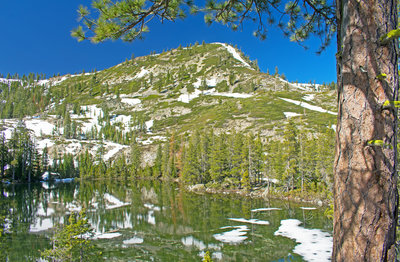