Lots of cafes and restaurants at the base, by the park entrance. It was great to grab a hot drink before and after the run.

Get there very early to park. It fills up very fast, and you don't want to have to add any extra distance to this run.

There is more than enough lodging around for the day before/after if you book in advance. I stayed at the Seorakdong Campground, which is about a 15 minute drive away and 15,000 WON a night.

There a cool craft beer place northwest of the park called "Craft Root" which had some decent beers, with to-go cans.

I'm sure you could, but the Korean's would think you were strange lol. They do not run on their hiking trails for whatever reason, they're generally quite fit and probably could.

This run starts off at the main entrance to Seoraksan National Park. You follow the southernmost trail system past some other big landmarks, like Biseondae and its sky-high cave.

Overall it is extremely well marked, I never had to look at a map even once. This is common for running in Korea, so I won't further spoil it by trying to do a turn-by-turn. I'll just highlight some of the key aspects of the terrain that you may want to know for packing/planning.

This is probably a reasonable day-hike for a fit person in excellent conditions and a water-snacks only packing list. In winter though, it was the closet thing I've found to a full on mountaineering experience in Korea. If you want a more relaxed experience, or are going in winter, plan on an overnight.

No camping is allowed inside the park. You must stay at one of the mountain shelters. There are three along the route to the summit. The lower two looked nice, but I wanted to do the whole ascent in a single push, so I stayed at Jungcheong shelter near the summit of Decheongbong (the high peak). I cannot recommend strongly enough to make reservations: reservation.knps.or.kr/fore…

The reservation system is window-based, so you can't plan too far ahead. See when you want to go, and then you have to wait for that window to open; about 1 month ahead of time. Be sure to sit at your computer with a good connection and hit refresh over and over leading up to the very minute that your window opens (usually 1000KST the date of opening). Running is immensely popular in Korea and every single bunk will fill up on weekends/holidays within minutes of the reservations becoming open, even in off season.

The Mountain huts are heated and have power, so don't bother with a heavy sleeping bag. You can even buy stove fuel, water, and limited food at them. I packed like I was self-sustaining because I had no idea what to expect, and it was unnecessary. In fact, it was blazing hot in there despite being -13 with a windchill of -50 outside. I was very hot even just on top of my sleeping bag.

I'm sure the summer terrain isn't too difficult. It is steep towards the top.

In winter, it was very much mountaineering, and I wish I had my ice axe instead of trekking poles towards the top. Very little exposure, but you could very easily fall and get minor injuries. The Korean's are very quick to throw on yak-trax and other traction devices as soon as it dusts even a slight bit of snow. As a result, they don't use any mountaineering footwork techniques. Consequently, the trail turns into perfectly smooth sloped hard packed ice-snow because they don't kick step, plung step, side step etc. I showed up in just La Sportiva Nepal Evos.....which would have been absolutely perfectly adequate if I was the trailbreaker. However I struggled, having to forcibly kick in every step for over 5000 vertical feet.

There is plenty of river access until the last 30%...the hardest 30%. So I was able to sustain my water with a filter-bottle easily up until I got to the top and had to buy water because I didn't have enough in the bottle to both cook, hygiene, and drink. If you want to do the climb "pure" and not buy stuff at the shelter, then you'll want to fill a good 2-4 liters at the river no more than 100 meters beyond the FIRST shelter (in winter at least) and preserve that for the top. I did find one more creek-fill a bit past that, but the flow was pretty slow, I can foresee it not being available 100% of the time.

Seoraksan is considered South Korea's most challenging mountain range. Don't expect Pickett's Traverse level adventure, but I found it the most fun in the country so far. 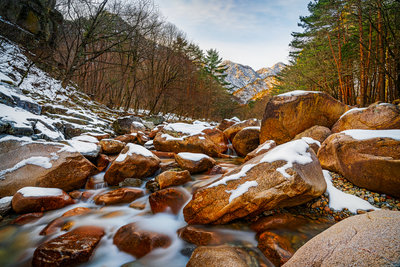 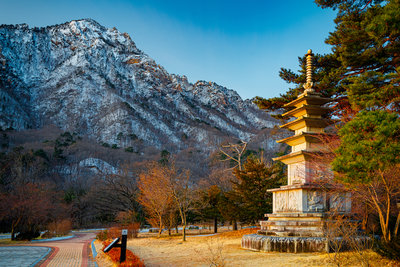 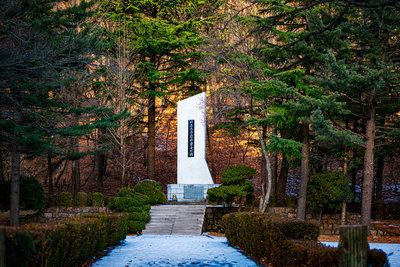 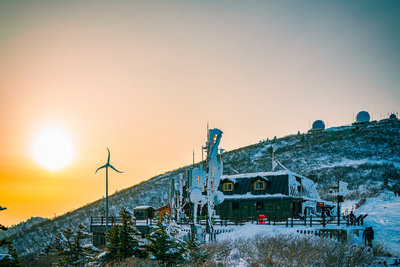 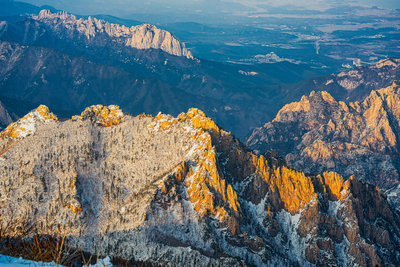