“Signal Knob gets its name as both Confederate and Union troops used it as a lookout during the Civil War. ”

This run is very similar to the Tuscarora - Bear Wallow Trail #405.2 but with a nice stop over to Signal Knob Mtn Spur. This run just takes that entire loop and puts the two runs together. The Signal Knob run in the George Washington National Forest has spectacular views of Strausburg VA. in the Shenandoah Valley, as well as Buzzard Rock in Fort Valley to the east.

Start the run from the right side of the Signal Knob parking area. The trail is blazed orange which designates it as part of the Massanutten Trail. Start uphill on the orange-blazed trail then shortly pass an old stone house on your left, cross a small stream, then follow the trail around the eastern section of the mountain.

Arrive at the Buzzard Rock Overlook. The trail will take a hairpin turn back to the south and becomes significantly more rocky. In 0.9 miles from the Buzzard Rock Overlook, the trail turns back to the north passing another nice vista of Fort Valley. Continue to follow the orange-blazed trail as it becomes less steep, then passes several nice camp spots just before arriving at the intersection of the Meneka Peak Trail.

Pass the Meneka Peak Trail on the left, continuing on the orange blazed Massanutten Trail as it winds around the ridge to your right and passing a transmission tower in another 0.8 miles.

Arrive at the Signal Knob lookout area. The lookout has some nice views north of the Shenandoah Valley and Strausburg VA. The Massanutten Trail continues as a orange-blazed gravel road now descending the mountain to the intersection of the blue blazed Tuscarora Trail the crosses the road.

Cross over the ridge and proceed downhill remaining on the blue blazed trail as it winds back and forth through the Bear Wallow area.

Pass the pink-blazed Sidewinder Trail on your right

Pass a white-blazed connector trail for Elizabeth Furnace. Continue straight on the blue blazed Tuscarora Trail as it winds around the mountain then arrives at a flatter area close to the valley, and an intersection where the blue blazed trail turns right downhill towards Fort Valley Rd./VA678

Continue straight on the orange-blazed Massanutten Trail (this section was formerly the the Tuscarora Spur Trail and was reblazed in 2002) as it descends slightly, then parallels Fort Valley Rd./VA678. 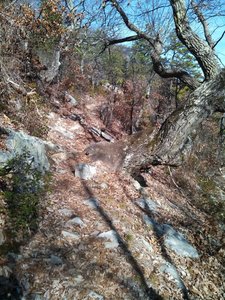 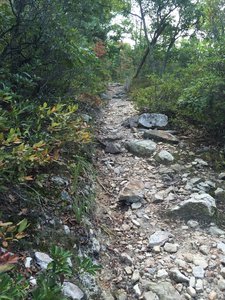 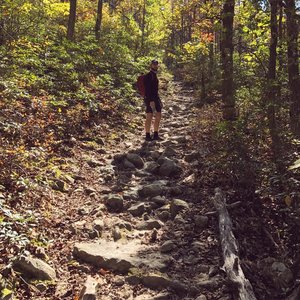 All Clear 46 days ago See History

Little Devil Stairs with AT Loop