The Parker Ridge Trail trailhead is found at a large, well-marked parking area along the Icefields Parkway (Hwy 93).

To run Parker Ridge Trail, start off by entering the beautiful fir forest, on the wide dirt path at the trailhead sign. Almost immediately the trail starts climbing the ridge—Parker Ridge. This climb lasts for the first 1.1 miles when the crest of Parker Ridge is reached. Along the way, the firs thin and lower vegetation abounds, followed by lichens and finally barren scree, as elevation is gained. And awesome mountain views take over, in all directions, EXCEPT for the southwest, south, and southeast that are dominated by the sight of Parker Ridge. Some of the notable nearby peaks are Mount Athabasca and Hilda Peak to the west, and Nigel Peak to the northwest.

At about the mile mark, a trail junction with Parker Ridge Spur is reached. This spur provides additional views with a slightly different perspective than the rest of Parker Ridge—definitely worth exploring on the way back. Continuing on, almost immediately at the 1.1 mile mark, the top of Parker Ridge is reached and "jaw dropping" views on the other side of the ridge come into view— Saskatchewan Glacier with its melt pond, the beginning of the North Saskatchewan River, and MANY mountains to the south on the far side of Saskatchewan Glacier, including Castleguard Mountain in the distance. These mountains hold the Columbia Icefield, a very large icefield that is the source of Saskatchewan glacier and several other glaciers. Also there are views of MANY mountains to the east.

The last half mile of Parker Ridge Trail is relatively flat as it follows the ridge just below its crest, on the southwest side of the ridge. The amazing views of Saskatchewan Glacier, etc, can be seen everywhere along this section and there are many places to take a break, snack, and admire the expansive wonder up here. When done, return the way you came, and don't forget to visit Parker Ridge Spur on the way back. 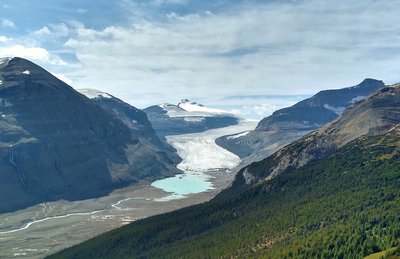 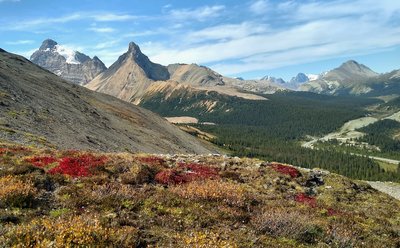 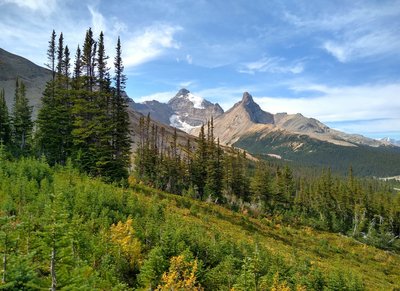 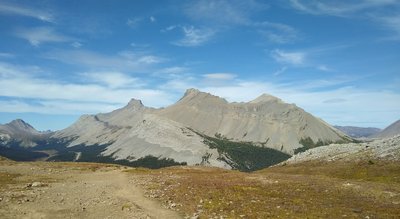 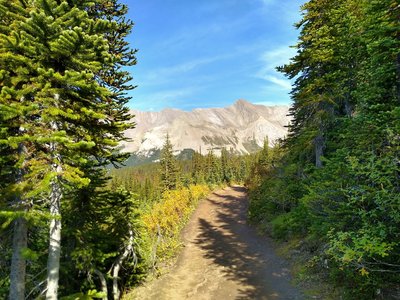