“Climbs ridge with sweeping views of Mammoth Mountain and Silver Divide and on to Superior Lake and rugged Beck Lakes. ”

Wilderness permits are required for overnight trips. Permits are issued at Inyo National Forest visitor centers. The quota allows 15 people to start overnight trips on the Beck Lake Trail each day, 9 reserved and 6 walk-in permits. Usage is light, so this is not usually a problem. You cannot drive to Reds Meadow; you must take a shuttle bus. Call Mammoth Lakes Welcome Center for more shuttle information: (760) 924-5500.

As an out-and-back run, I have described this trail as starting from the John Muir Trail near Devils Postpile and climbing up to Superior and Beck Lakes. However, if you use it as part of a loop, going up the Summit Meadow Trail and passing Fern, Anona, and Ashley lakes, then I would recommend using this trail as the downward leg of the loop.

Starting from the JMT, the trail makes a steep climb up the ridge above Johnson Meadow. For the first part of the run, the trail surface is a dusty pumice. The entire length of the trail is fairly well shaded with red fir and mountain hemlock. It is almost 2 miles and 900 feet of climbing to the first reliable water.

About a mile farther and 400 feet higher, the trail finally goes over the ridge southeast of Red Top Mountain. From here, there are sweeping views across the San Joaquin River canyon towards the Mammoth Crest and across Fish Creek Canyon to the Silver Divide and all the way up to Red and White Peak.

From the summit, the trail descends gradually through forest and wet meadows to the junction with a connector to the King Creek Trail. The trail climbs gradually again for less than a mile to reach Superior Lake.The far side of the lake is surrounded by beautiful red rock slopes, but the lake itself is relatively shallow and lacks rocky outcrops. There are some fair-to-good campsites near the lake.

From this point on, the trail is no longer maintained, although it is frequently traveled. There are grassy meadows and downed trees to cross. Patches of snow hang around here, which can make the trail difficult to follow; however, the trail stays close to the creek all the way to Beck Lakes, which are less than a mile away. There are scenic campsites on the south shore of the lower lake, but no campfires are allowed. A faint trail goes around the north shore to the barren upper lake, which is only about 30 feet higher than the lower lake. 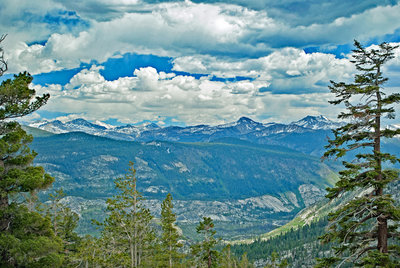 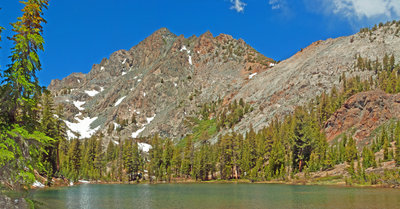