“Easily connects the Cabin John Trail to the Chesapeake and Ohio Canal Towpath. ”

There is an extra lane on Macarthur heading away from the one lane bridge for parking purposes.

This trail is easily run and a good connector between favorite, longer runs.

The trail begins at Macarthur Blvd just on the opposite side of the one-lane bridge over the Cabin John Pkwy from the end of the Cabin John Trail. It is along the edge of a cliff with a fence for the first 100 meters until it hits a series of curves and switchbacks to bring the trail down about 100 feet of elevation. The trail has wooden steppers placed every three feet for this section to aid traction on the steep grade.

Once on the opposite side of the Clara Barton Pkwy the trail turns left sharply just past an upright, 10-foot metal vent pipe. Once you turn left you are traveling parallel to the Chesapeake and Ohio Canal on the opposite side of the towpath. Proceeding further will lead to a bridge over the canal which connects to the towpath at about the 9-mile mark. 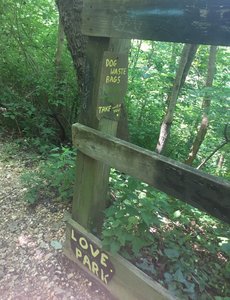 Great Falls Overlooks Out and Back