Cabezon Peak Out and Back

“The run to the summit of this prominent volcanic plug rewards you with expansive views of the Rio Puerco Valley. ”

On the unpaved road leading to Cabezon Peak, there are several signs warning of potential inaccessibility during inclement weather.

Cabezon Peak is a notable landmark located in northwestern New Mexico. Its name is Spanish for "big head." Rising at about 8,000 feet above sea level and 2,000 feet above the Rio Puerco Valley floor, Cabezon Peak is the most prominent of approximately fifty volcanic necks in the volcanic field of Mount Taylor.

Although the ascent to the summit is not particularly long, the terrain is tricky and the location is remote with shoddy cell service. There are no natural water sources so bring sufficient water! Footwear with good traction is important as you are more likely to fall descending down the steep loose gravel. The BLM recommends leaving the dogs and kids at home.

The run to the summit is mostly Class 2 scrambling up steep and rocky terrain with a few sections of Class 3 climbing. The Bureau of Land Management recommends wearing a hardhat due to the potential danger of falling rocks. This is especially a risk if you are traveling in a group and are ascending behind someone else.

If accessing from Albuquerque, take I-25 North for about 17 miles to US 550 West. Continue for about 41 miles and turn left on NM 279 past the village of San Luis. At this point the pavement ends and the road can become treacherous in inclement weather. Keep left at the fork and after 1.5 miles on the left you'll see the BLM sign for Cabezon Peak. You can follow the accompanying dirt route to a decent parking area, although higher clearance vehicles are recommended.

There is a registry at the parking area at the base of the trail. The trail eventually takes you to the east side of Cabezon Peak. It continue as a perimeter trail encircling he base of the peak. However, after about 1.1 miles, cairns indicate the continuation of the summit trail on the left. Heading northeast up a vague trail amongst loose rocks, you'll soon encounter the first Class 3 section. Faint red arrows painted on the rocks indicate to go "up." Shortly after this ascent, the gully will become more obvious. After ascending the gully, you'll emerge on small flat section of rock with a great view of valley. Continue your ascent up to the moss-covered rocks to your left and soon a cairn will mark the correct route on a fairly obvious trail.

Continue scrambling northeastward on the faint trail as another red arrow on a rock pointing upwards indicates the correct route. Do not follow the foot path to its termination under the large tree; instead, begin the run's final scramble by going up the large rocks south of the tree (you want to be above it and to the left). All that remains is a run along an obvious trail leading to the summit's rock shelter in which you'll find the summit registry and be rewarded with fantastic views of the Rio Puerco Valley and its various land formations.

Piñon and juniper trees are scattered among the rocky foothills. Cacti, various grasses, and shrubs are plentiful. This area is home to several species of bird including meadow larks, jays, quail, doves, and hawks. Mammals you may see include rabbits, prairie dogs, badgers, kangaroo rats and rock mice. If you are really lucky, you might spot a coyote. In the summer months, be mindful of the possibility of rattlesnakes. 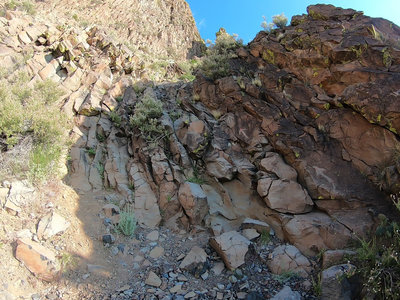 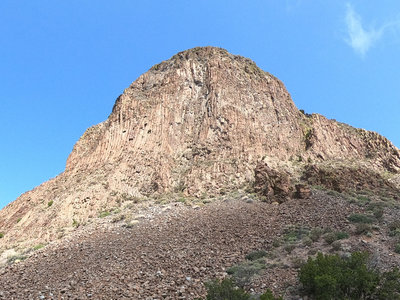 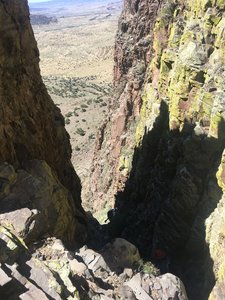 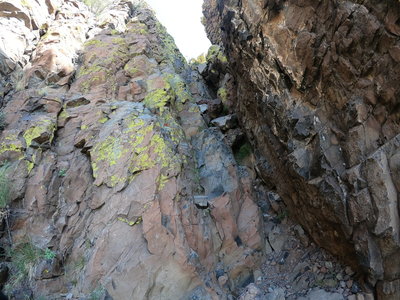 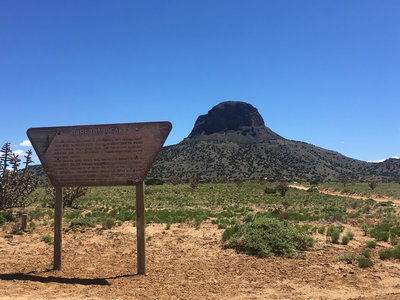