The Cedro Peak runs include a 50K, a marathon, and a half marathon. The race is put on by runners for runners. Great swag, great course, and great volunteers make this a special event.

The 50K race, featured here, is almost entirely on singletrack trails, with no paved roads. It is rocky in places but also has some fantastic, flowing, sweet dirt singletrack trails. From Cedro Peak, you can see the Sandias to the north, Mt. Taylor to the west, and the Manzanitas to the south.

You'll run through pines, cedar and junipers. You might see Abert's squirrels, horned toads and plenty of lizards. Black bears are in the area, but you most likely will not be privileged enough to see any.

The trails in this race include soft dirt, hard-packed dirt, and plenty of rocks!

The 50K race starts at Oak Flats Picnic Area. After exiting the parking lot, the runners pass through the Ponderosa Aid Station and then continue on towards the Juan Tomas Open Space, where they complete a rolling, flowing 4.7 mile loop. The course then returns to the Ponderosa Aid Station and heads north on Mahogany trail. This trail has been recently re-routed by the forest service.

The course connects up with Another Juan Trail to the west, and then turns north on Pokerchip North. There is an aid station at the intersection of Pokerchip North with Juan Tomas road. The course continues north until turning west onto Meadow Singletrack trail. Runners follow this to the intersection with a dirt road, taking a left and soon leaving the road to run on Cedro Singletrack (Trail 5252B). This trail continues to the major aid station at the Cedro Group Campground on Forest Road 252. Leaving the aid station, runners follow this dirt road to the top of Cedro Peak. This peak offers some fantastic views!

Runners turn around and fly back down the road to the intersection with Forest Road 542, where they turn west. One more mile on the road and then a quick turn off onto Powerline Trail (5543). Another quick turn takes runners to Delbert's Trail (Trail 5622), which they follow until they come to another dirt road and the Four Corner Aid Station.and the start of Mighty Mule (Trail 5257). Mighty Mule (Trail 5257) takes runners to Rattlesnake trail, which quickly intersects with Forest Road 13 which brings runners back to Cedro Singletrack (Trail 5252B).

From here, runners retrace their steps to Meadow Singletrack, Pokerchip North and the Juan Tomas Aid Station, Another Juan, Mahogany and the Ponderosa Aid Station. A second loop through the Juan Tomas Open Space brings runners back to Ponderosa Aid Station for the last time, but instead of heading straight back to the parking lot, runners take a short detour to the "blue table," where a shot of distilled blue agave. Then it is back to the parking lot.

There is also a marathon and a half marathon, both of which are run on portions of this 50K trail.

You'll be running through pinion, juniper and cedar trees. You'll see cactus but also tall pines. Turkeys are often seen or heard in the area and bears have also been spotted.

Keep your eyes out for horned toads. 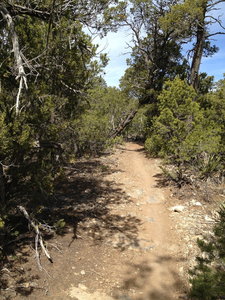 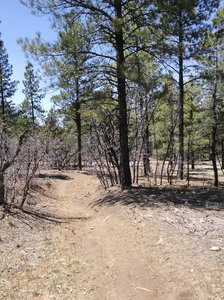 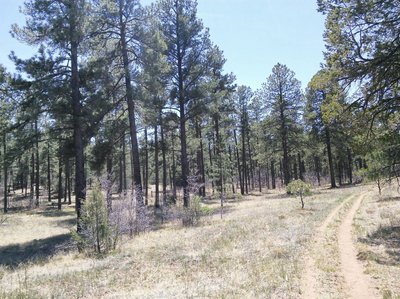 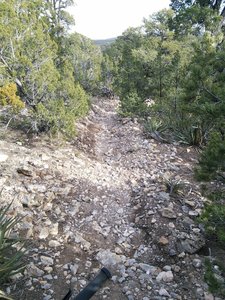 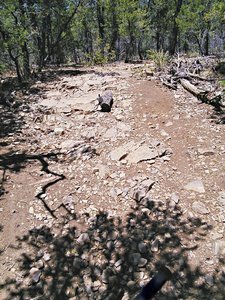