Currently, the only access is from the small Devil's Slide parking lot, which often fills. If you wait 5-10 minutes, someone may leave. Gates are open 8 AM to 7 PM. There are future plans to open a multi-access trail from Pacifica. Currently, no bikes are allowed.

There are no fees. Use the same parking lots as the Devil's Slide Trail, but note that these lots are small and are often filled.

Footing is good, but the trails are steep. A loop that hits most of the trails is only about 2.5 miles long. For a longer run, you could combine these trails with an out and back on Devils Slide or the Old Half Moon Bay-Colma Trail.

The trail sign gives the length as .5 miles. Some short sections are quite steep.

An amazing amount of reconstruction work has been done on these trails, much of it by volunteers. Join the Pedro Point Headlands Stewardship Program to help continue this work. A few years ago, the trail was narrow, overgrown and deeply rutted by bikers and erosion. Now it is wide, smooth, and entirely run-able, but it has some short steep spots.

From the junction, the Bluff Trail climbs up to the summit at the junction with the Middle Ridge Trail. As you descend from this junction, you have great views of San Pedro Rock and of the 600 foot cliff that forms the south side of Pedro Summit. San Pedro Rock, an island immediately adjacent to Pedro Point, has clearly visible layers of sedimentary rock have been tilted almost vertically by tectonic forces.

Much closer on the coast below, the same vertical layers can be seen on the two small rocky points with black tips. You cannot see it from here, but from the Devil's Slide Trail there appears to be a giant storm drain or cave just beyond these two points. This is actually an illusion created by a shallow alcove of black rock surrounded by white rock.

Just before the junction with the Middle Ridge Trail, a small trail heads down towards the coast below. After a short distance, it becomes very narrow and difficult and the poison oak is hard to avoid. In 2012, I was able the climb all the way down to the coast, but by the next year, erosion had made this impossible without rope.

The Bluff Trail ends with a up to the top of Pedro Summit, which has gorgeous 360 degree views of San Pedro Rock, Shelter Cove, the Pacifica districts of Pedro Point and Linda Mar, and the surrounding coast and hills. This is one of the best views along the entire coast.

From the top, there is an interesting trail of use that heads down the ridge in the direction of San Pedro Rock. It is not possible to climb down to the coast from here, and poison oak become more and more of a problem as spring progresses.

The trail of use heading down the north ridge road leads to private property.

There are hundreds of native plants within the park. Part of the work being done is to suppress invasive species, repair the soil, and to restore native plants. Gray whales migrate south in late fall and north in early spring. 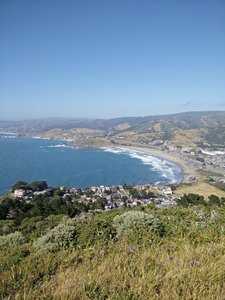 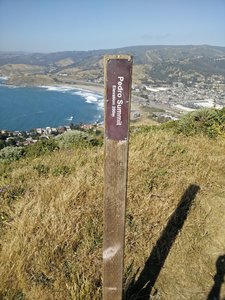 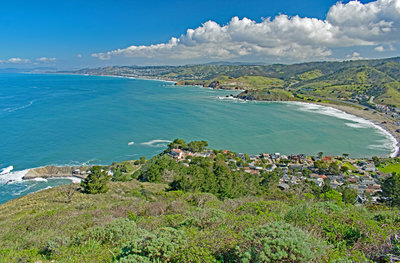