Parking at the Eklutna Lake parking lot costs $5 per day or an Alaska State Park Pass.

This featured run is not ideal for backpacking. Perhaps a June trip would allow for ample snow for water along the route, but I would not count on any water outside the two valleys in July or August.

This run starts at the Eklutna Lake parking lot and is a loop run that can be performed both clockwise and counter-clockwise. It is debatable which direction is easier, but perhaps going counter-clockwise would make the area at Bright Peak easier. I will describe the run going clockwise as that is how we did it and how it is mapped. We chose to go that direction so that we could stash bikes along the Eklutna Lakeside Trail at the Bold Ridge Trail the night before for an easier exit at the end of a 20 mile day.

Starting from the Eklutna Lake parking lot, follow the Twin Peaks Trail, and connect with the Pepper Peak Trail taking you up into the alpine. Nearly half of the elevation gain is completed by obtaining the summit of Pepper Peak, which also places you on top of the Eklutna High Ridge Route to be conquered. Continuing east along the ridge, the trail peters in and out but the ridge is very easy to follow as you make your way over Salt, 5285 and Yudikench peaks. The entire way, you have incredibly majestic views of the tallest peaks in Chugach State Park standing over Eklutna Lake along with the Knik Arm and Glacier.

After obtaining the summit of Yudikench Peak, you drop down to a saddle where I was able to find a little bit of snow and a pretty gross pool of water that I filtered to refill my hydration bladder. I had run out of water for a while by this point so it was a big relief to come across this in early August on one of the hottest days of the summer.

Continuing up the other side of the saddle, you'll eventually reach the top of Bleak Peak, which is quite flat at the summit. After stomping around the top of Bleak to make sure we actually touched the high point, we headed due east towards the round ridgeline that contains Bright Peak. Getting cliffed out trying to stay on the northern part of the ridge, we found a game trail in the scree that traversed just below the cliffs, and eventually we got to the point where we could gain the ridge. That is the section that is likely much easier descending from Bright than it is to ascend. Once on top of the ridge, it is a nice run to the summit of Bright, then down a rocky descent down to the valley.

This featured hike has an extremely difficult rating due to its length and steep grade. Unless you are a world-class nordic skier, I would plan for 14+ hours, including the time savings gained by stashing bikes at the Bold Ridge Trail.

During our excursion, we saw a wolverine and a herd of dall sheep. It would be possible to also see bears, goats, moose, and other typical Alaska wildlife. 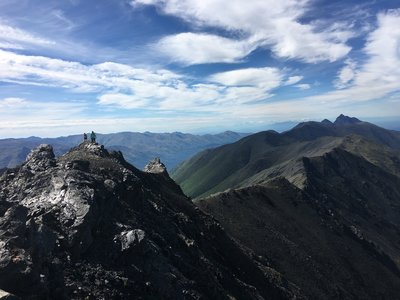 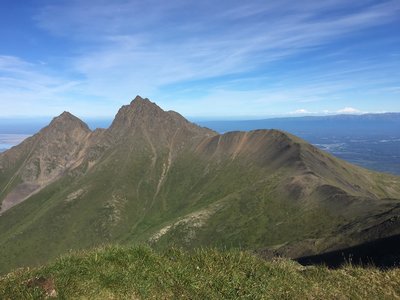 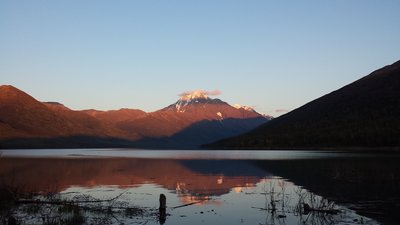