“A wonderful run above Lake Atitlán from Jaibalito through Tzununá to San Marcos la Laguna. ” A lovely one way run along the lake. The rah transitions from trail to dirt road about halfway along, though the road isn't too busy.

Some key points about this run:
- The first portion, from Jaibalito to Tzununá, is the hardest. There are a lot of ups and downs with a few steep climbs, sometimes scrambling up/down rock steps. There are also some portions where the trail is narrow and close to a steep edge. Not treacherous, but something to consider if you have any issues with heights. However, most of the trail is wonderful and well worn, but not marked. There are a few junctions where the path splits off to someone's house, but it only takes a few seconds to see which direction to take.

- From Tzununá to San Marcos la Laguna the trail is mostly a dirt road that cars/tuk-tuks travel on. Other than the climb in and out of the towns, this part of the run is not difficult.

I took a launcha to Jaibalito from Panajachel. Once in Jaibalito there is a little cafe to the right of the dock, El Indigo, where you can grab a small bite or drink, refill water, or use the restroom.

From the dock, head straight up the path toward the center of town and take the first path on the left. Once out of Jaibalito, you immediately start climbing. This is where the fun begins. As you follow the trail, there are a lot of places to take pictures of the lake, volcanoes, surrounding towns and a few houses.

Tzununá is the halfway point. I didn't stop to eat, but it could be a nice place to stop and recharge. If you brought food, sit under a tree or go down by the dock for a picnic. As I passed through I didn't notice any restaurants (not to say there aren't any), but there were a few small stores. After running all of the way through town, when the road comes to a "T" turn left toward the water. Before you get to the dock, take the road to the right which will soon start climbing. Follow this road all of the way to San Marcos la Laguna.

As you start coming into San Marcos, there will be the occasional store, restaurant and hotel. One of the first junctions you'll see will have 3 options: left toward water, right up the hill, or forward then quick right toward town center (this is the one to take). The road will weave through town until you get to the center. There's a school, covered basketball court, etc. There are lots of restaurants, especially down the path to the left (opposite basketball court). I ate at Circles Cafe, which had coffee/tea/smoothies as well as sandwiches, breakfast, etc.

From there, follow the path toward to the lake and a boat back home. 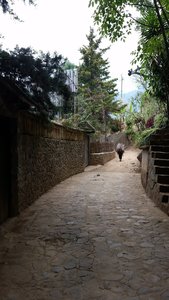