Go east from Ashland, Oregon on Dead Indian Memorial Highway for 18 miles to the sign for the Wilderness Trails Youth Camp. Turn left at the sign on to gravel Forest Road 2500-100 and follow it for just under seven miles, staying right at the first fork and left at the second fork, to the unsigned trailhead on the right just before an open gate. Note that this road may be blocked by snow and fallen trees until early summer.

On the east side of the upper meadow, are the remains of the Dunlop Ranch. "Old Man Dunlop" is said to have been a settler from the Eagle Point area who squatted here in the 1920s, long before it was accessible by road. He raised goats and may also have utilized this remote spot to make bootleg whiskey ("moonshine") during Prohibition. During the Depression Era of the 1930s, a family named Nickerson got by here raising mohair goats, whose hides were used for car upholstery and convertible tops. The ranch site has been abandoned since the late 1930s. In its day, it hosted three log buildings: a cabin, a barn, and a shed. Only log-trimmed outlines remain of the cabin and the barn. Thanks to the sturdiness of its double log walls insulated with sawdust, the food-cooler section of the shed is the only structure still (mostly) standing.

Dunlop Meadows are two large meadows in the South Fork – Little Butte Creek drainage, southeast of Dead Indian Soda Springs, and overlooking the South Fork Canyon. From the trailhead on Forest Road 2500, it's a short walk to the first meadow, which is filled with wildflowers from May through mid-July, with a peak in late June. The remains of the Dunlop Ranch are also in this meadow. From there it's another short walk down to the second meadow - another wildflower mecca in season.

Past the second meadow, the trail starts to fade as it skirts an old spur road (FR 2500-195) and, about 0.7 miles from the trailhead, reaches a little footbridge crossing an unnamed tributary of the South Fork. From here, the trail is supposed to continue on down to the South Fork itself but following it requires some effort and navigation skills as it has not been maintained in a long time. 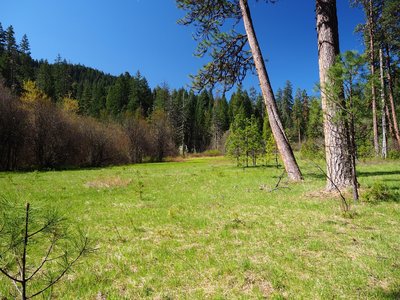 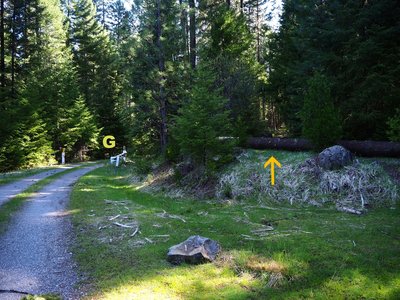