“An amazing run with amazing views the entire time. ” It is recommended to do the routes with altitudes of over 1,700 meters between the end of June and the end of September.

It takes around 8 hours to climb and is considered very difficult. The best time to climb the Pic del Comapedrosa is from the end of May to October, both because of the access and because of the spring and autumn colours of the natural surroundings. The height of the peak makes it an excellent viewpoint surrounded by abundant vegetation and with beautiful panoramic views of the rest of the Pyrenees.

Took the L5 bus to Arinsal from Andorra La Vella (city center, where most other bus routes like buses from Barcelona drop you off). From there, go through a tunnel for cars. After going through the tunnel, turn right. You'll see house-like things on your left and a small parking lot on your right. Continue past these and you'll find the start of the trail. It starts along a road.

From this point, we go down to the west until the path starts to go upwards again. We pass the Estany Negre on a scree and reach the crossroads with the Camí del Comapedrosa. Then we climb to the right following the yellow spots over the crest to the peak.

You can return back the way you came, or take a route that is less like following a rocky ridgeline. 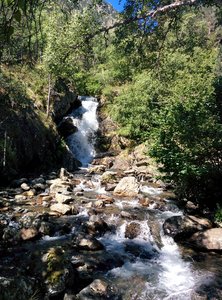