“A wide trail that winds through the old Folger Estate until its junction with the Alambique Trail. ”

The trail is an old service/fire road, so it is wide and relatively free from obstacles, making it a great running trail as it is easy to pass. Be on the lookout for horses, as the trail is open to equestrian use.

The Loop Trail departs from the Folger Stable area of Wunderlich Park. Run between the Folger Stable and the Carriage House and follow the service/fire road as it breaks off to the left and begins climbing into the park. You'll pass a couple of horse pens and some RVs before going past a gate that keeps cars from continuing further up the hill. The trail turns to gravel at this point, but is double wide which makes for easy running with friends. Cutting back to the left, the trail changes into a dirt trail as it climbs through the wooded hillside.

At roughly 0.3 miles, the trail bisects the Bear Gulch Trail (an alternative way of accessing the trail) and enters into an area of ferns and second growth redwoods. As you continue, the redwoods fade and eucalyptus trees become more predominant as the woods open up a little bit and you get glimpses of Stanford off to the left. You can see the Dish and the Hoover Tower at various points along the trail as it gradually ascends the hillside.

At roughly 0.9 miles, the trail begins runs parallel above the Alambique Trail until the two eventually intersect. At this point, you have several options. You can continue exploring into the park by taking the Alambique Trail to the right up to the Meadow Trail, giving you access to more of the park, you can take the Alambique Trail back to your car, making a nice loop run out of the two or you can retrace your steps back to the stables and where you began.

The Loop Trail is popular because it can be combined with the Alambique Trail to make an enjoyable 1.75 mile run that isn't overly difficult. 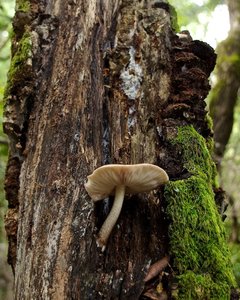