“Run along the beautiful Blaeberry River in its lush fir forested valley surrounded by rugged peaks of the Rockies. ”

Depending on conditions of the Blaeberry Forest Service Road, 4 wheel drive or a run along the road may be needed to get to the trailhead at Cairnes Creek on the Blaeberry Forest Service Road. The road may have a few washouts, and if it is being worked on, it can be closed where they are working on it. Depending on the road's condition, one may not be able to drive all the way to the trailhead shown in this description. Plan your adventure accordingly. The effort is well worth it!

The David Thompson Heritage Trail is part of a historic route from the prairies, across the Rockies, to the Columbia River and Pacific Ocean. This route was used heavily by the First Nations. In 1807, First Nations people guided David Thompson, a fur trader who extensively mapped Alberta and British Columbia, over Howse Pass and down the Blaeberry River along this route, thus opening it to the fur trade. By the second half of the 20th century though, this section from Howse Pass down the Blaeberry RIver was used only as a remote hiking trail, although it was (and is) part of the GDT (Great Divide Trail). However, as the Great Divide Trail Association went into a quiet period up until 2012, this trail saw little maintenance, became overgrown, and dificult to follow. Fortunately, as of September 2018, this historic David Thompson Heritage Trail has been restored to a well cleared, easy to navigate trail.

The David Thompson Heritage Trail begins along the Blaeberry Forest Service Road as a wide fire road type trail that leads to gravel flats along Cairnes Creek after 0.1 miles. The trail vanishes in the gravel flats but head upstream for a very short ways to two logs that provide a good crossing over Cairnes Creek. Turn right after crossing the creek to pick up the trail which is singletrack from here on as it enters the fir forest. The beautiful Blaeberry River soon comes into view and the trail reaches it at the 0.4 mile mark.

After reaching the Blaeberry River, climbing very gradually, the David Thompson Heritage Trail runs along the river to Lambe Creek. Here, the Blaeberry River is in a deep, lush fir forested valley, as the trail sometimes runs right next to the river, and sometimes runs a short ways away with the river below the trail. The forested steep side of the valley across the river is cut by creeks that flow into the river. On the trail side of the river, the trail crosses only a few small creeks, until it reaches Lambe Creek at the 4.7 mile mark. Rugged peaks can be seen when looking both up and down the river valley.

For the first 2.3 miles along the river (mile 0.4 - 2.7), Doubt Hill rises steeply to the left (west of the trail). At about mile 1.2, the top of Doubt Hill can be seen as the trail runs through the lower area of a rock slide that came down one of the steepest slopes of Doubt Hill. After passing Doubt Hill, the forested slopes of Mount Termier rise to the left of the trail from mile 2.7 to Lambe Creek at mile 4.7. However, the top of Mount Termier can not be seen due to the terrain and thick forest.

Lambe Creek is reached at mile 4.7. Upstream (to the left/west) on Lambe Creek, an impressive waterfall cascades down a narrow vertical gorge. Lambe Creek is bridged. After crossing Lambe Creek, climbing gradually, the trail continues through the forest that thins and crosses meadows on its way to Howse Pass. A small pond with a loon, in a meadow, is passed. Rugged, snowy mountains with glaciers, can be seen through the trees. The trail reaches Howse Pass, a National Historic Site, and crosses into Alberta and Banff National Park where it becomes the Howse River Trail down to the Icefields Parkway (Hwy 93)

This is a segment of the GDT (Great Divide Trail).

Lush forest made up primarily of spruces, firs, and some cedars, a few yews. Many types of berry bushes. Bushy alder and willows. Mushrooms. Other less dominant vegetation that thrives in moist northern forests. Bears live here. Porcupines can be a problem eating brake lines, so best to wrap chicken wire around parked cars at ground level (use rocks to hold the chicken wire to the ground). 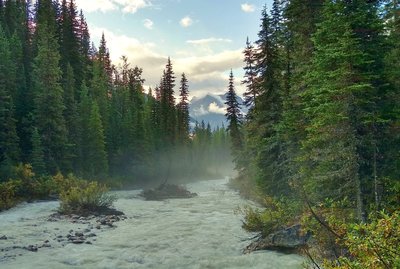 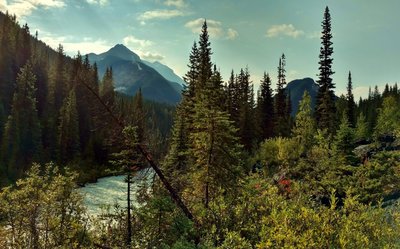 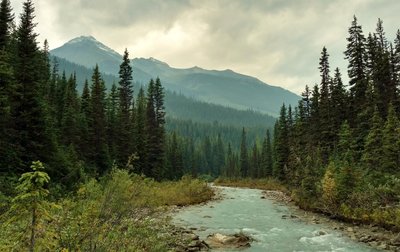 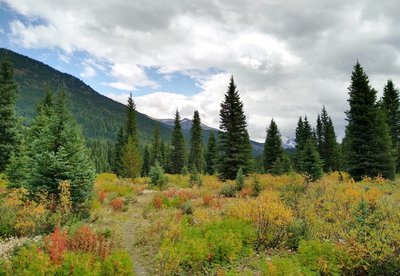 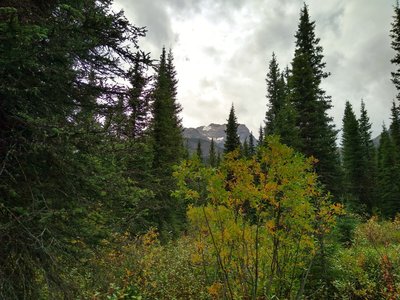 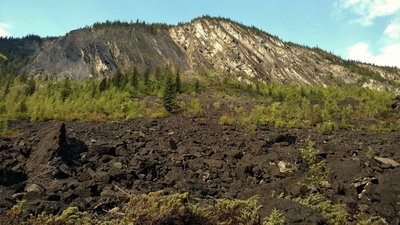