“From the fir forest, through creek valleys, across creeks, into alpine meadows, and across two passes, this is awesome! ”

Camping along this trail is limited to the two designated trail camps at the ends of this trail—Four Point Trail Camp (south end) and Jonas Cutoff Trail Camp (north end). Permits and reservations are needed for the trail camps. They can be gotten online at the Parks Canada permit/reservation website: https://reservation.pc.gc.ca/

This is a segment of the GDT (Great Divide Trail).

Jonas Pass Trail starts in the fir forest at a trail junction on the South Boundary Trail just north of Four Point Trail Camp. At first it's flat as it runs through the forest, until the trail soon begins a half mile climb up a forested ridge. As the trail climbs, the forest thins and mountains appear to the southeast. At the 0.8 mile mark, the climb eases, although the trail does continue to gradually climb for the next five miles to Jonas Pass.

The first of several creeks that need to be rock hopped, is reached at the 1.3 mile mark. At this point, the trail is out of the forest and in meadows dotted with firs. The trail follows Four Point Creek upstream, which stays to the right of the trail, although the creek is a ways off. The creeks that the trail crosses are side creeks that flow into Four Point Creek. The first side creeks tumble down steep walls to the left, and as the trail continues, the creeks simply run through the meadows. The meadows soon become treeless alpine meadows.

Nearing Jonas Pass, the trail is still in a valley between the chains of mountains and ridges that border the Four Point Creek valley, but sounds of Four Point Creek disappear, as the creek dwindles to small streams in the alpine meadows. Peaks on the other side of Jonas Pass begin to appear. Jonas Pass is reached at the 6.0 mile mark. It is marked by a large cairn with caribou antlers. Jonas Pass is a long pass (2-3 miles long) in the alpine meadows as the trail gradually climbs to the cairn and then gradually descends. As the trail descends the north side of the pass, the headwaters of Jonas Creek appear below the trail to the left.

At the 7.9 mile mark, a looming buttress can be seen to the right with a ridge running northwest from its base. The trail veers right to climb this ridge. The views in all directions get better and better as the trail climbs to truly awesome views, including mountains, snowfields, glaciers, a lake, and expansive creek valleys! The rocky ridge top—Jonas Shoulder—is reached at the 9.5 mile mark. From Jonas Shoulder, the trail descends down the other side of the ridge into the meadows. 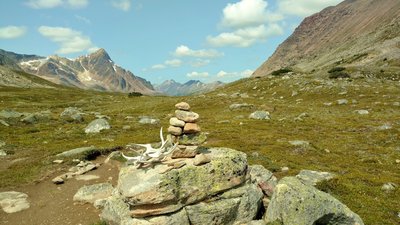 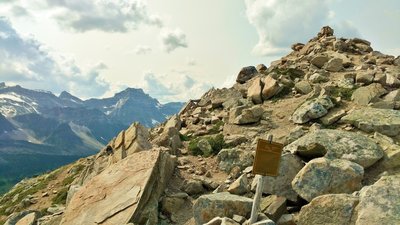 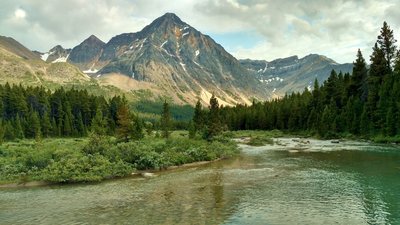 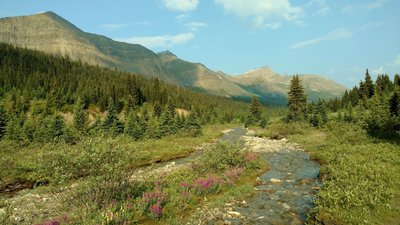 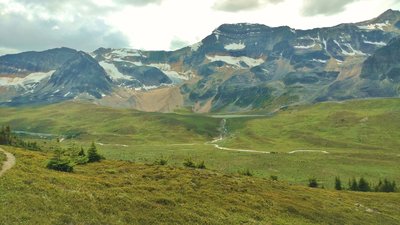 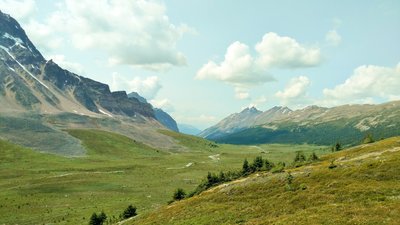