“A steady climb along a stream that lead from woods and meadows to incredible views of the Never Summers above treeline. ”

A few rocky and muddy sections, but otherwise the footing is mostly easy and the climb is not too grueling although it is long. Plenty of water along the way to filter if needed.

This trail departs from the Bowen/Baker Trailhead in Rocky Mountain National Park. Runners will cross the Colorado River valley on a wide dirt path. Keep an eye open for moose and elk in the grassy meadows of the valley. Once you get to the forest, you'll come to a Y with the Bowen Gulch Trail #119 splitting to the left and the Baker Gulch Trail continuing to the right.

The first part of the trail is a gentle ascent thought mostly pine forests. There is some evidence of pine beetle kill here, and you'll run through a section where there are many young pines. Shortly after you start, you'll cross into the Never Summer Wilderness.

From here, the trail climbs along a stream with several creek crossings (most have log bridges) over small side streams that run down from the northern slopes to join the main stream. You'll skirt several meadows where you have a nice view up the gulch, and you can start to catch a glimpse of where you are headed.

Just shy of 4 miles, the trail crosses the Grand Ditch Trail which is more of a dirt road that is used to access a man-made water canal. Head left on the road and keep an eye open for the log to cross the canal and pick up the Baker Gulch Trail again.

Wildflowers such as columbines, indian paintbrush, delphinium, and many others in season. Moose, elk, deer, bears. 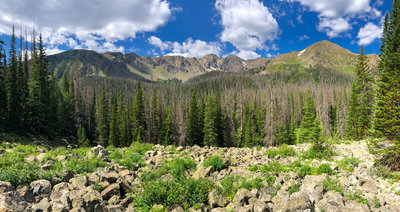 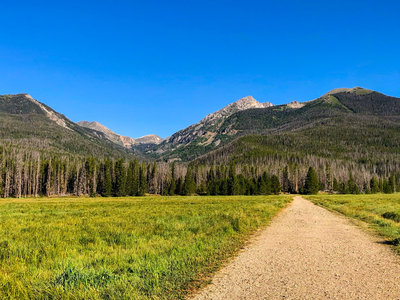 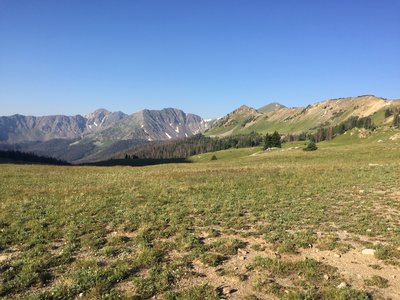