“A nearly six-mile loop that hits all major sights north of the Sugar Creek in Turkey Run State Park. ”

The Nature Center features this trail as the 5-mile challenge. Runners completing the run in one day can receive a sticker when they take pictures of themselves at the Lusk Home (east), Camel's Back (north) and Boulder Canyon (west) for proof.

The trail boasts 1,500 man-made steps spread out fairly evenly over the course of the trail, and allows runners to see the best parts of the park by joining Trail #3, Trail #4, Trail #5, Trail #9, and Trail #10, into a single loop. The trail visits the Coal Mine, the Narrows Covered Bridge, Lusk Home, the Punch Bowl, Camel's Back, "140" steps, Boulder Canyon, Falls Canyon and many stream crossings, making the approximately six-mile run very worthwhile. Parts of the trail require runners to travel along as well as in the stream, so runners should dress appropriately!

The trail starts just after the suspension bridge that connects the north and south (park entrance, Nature Center, and parking lot) side of the park. Follow Trail #4 scooping under the bridge and head east for Lusk Home. The trail starts out with an gentle climb then a few steps downhill for the coal mine on the right.

The increasingly muddy path continues along the Sugar Creek east to the edge of the park, where eventually an opening in the bush leads to a platform lined by boulders for a view in front of the Narrows Covered Bridge with another bridge servicing a county road behind.

A left-kink in the trail puts runners north for the Lusk Home just a short distance away. The trail then joins with Trail #8 from the left, and the shared trail runs briefly northwest with a few tame stream crossings before Trail #8 breaks off of the left. The route continues on Trail #4 skirting along the northeast of the park before bringing runners along a larger stream that becomes the Punch Bowl.

Runners make a right to continue on route downstream of the Punch Bowl, this requires visitors to thread the water briefly before Trail #10 begins on the right. Runners go right on Trail #10 Spur, where switchbacks lead to an observation deck when the trail ends at Camel's Back. The trail requires runners to backtrack the spur and continue on the right at the fork.

Head west at the intersection on Trail #3 along the creek and continue straight onto Trail #5 when the Trail #3 branches perpendicular off to the left. The "140 steps" ladder lays about 1000 feet beyond. Runners will have to descend one of the three sets of wooden ladders to reach Trail #9, which begins on a bridge off to the side of on the bottom the first ladder.

The trail condition adds onto the challenge that the elevation change of the trail presents. Just beyond the bridge lays the most demanding stair-climbing throughout the trail. The terrain becomes much more forgiving and remains flat for about 2,000 feet. Runners do not reap the reward of the ascent until they scramble down some boulders, in water again, to arrive the Boulder Canyon, with a secluded waterfall off to the left of the canyon.

Runners continue downstream to follow an unsuspecting dirt path veering left of the creek for a short ascent. The trail remains narrow on the edge of a hill until the flatter parts of the hill. The Falls Canyon awaits on the descent a few minutes away, paving way for water flowing into the Sugar Creek just ahead. The trail rejoins with Trail #5 and Trail #3 again just beyond the last canyon, bringing visitors along side the creek passing by the Ice Box, before the trail concludes at the suspension bridge. 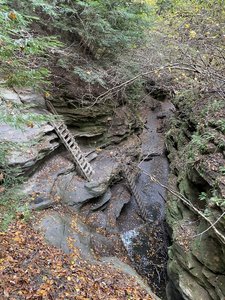 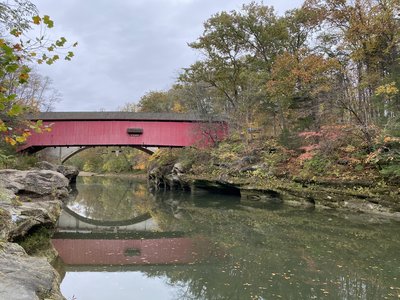 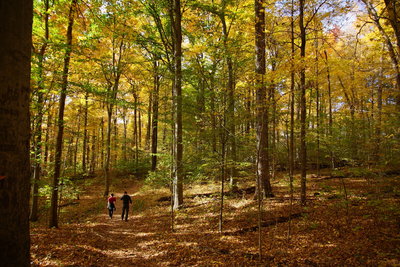 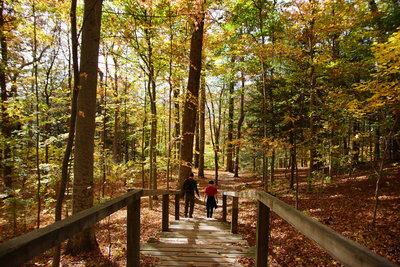 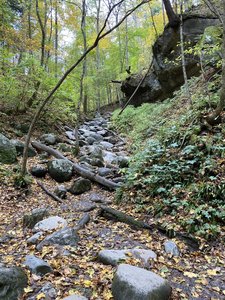 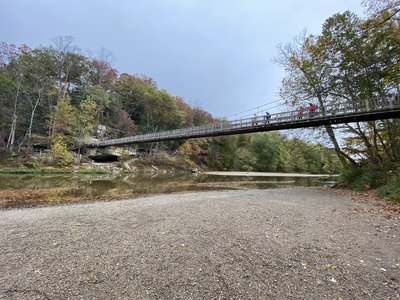