Adventure Pass required for parking at trailhead. No bicycles on the Pacific Crest Trail and Hawkins Ridge Trail.

This is a high alpine wilderness loop with great views of the LA basin and desert. The highlight is the Hawkins Ridge Trail #9W28 with views of Mt. Baldy's impressive rise above the chasm of the East Fork.

High altitude sickness can occur. Drink plenty of fluids. Snow and ice can linger well into spring. Hunters use the Hawkins Ridge Trail in fall.

This is a great run to do when the lower ranges are too hot. This loop uses the popular Windy Gap Trail #9W06 , a portion of the Pacific Crest Trail, the Hawkins Ridge Trail #9W28 and the South Hawkins Road #3N07 to make a long but rewarding run into the high alpine wilderness and back.

Starting from the trailhead, the Windy Gap Trail #9W06 passes through an oak and bigcone spruce forest crossing the Deer Flat Road (paved) and later the South Hawkins Road #3N07 (dirt). As the trail climbs, it enters into a Jeffrey pine forest with areas covered by buckthorn, manzanita, and buckwheat. Areas of massive sliding can be seen as the trail climbs up to Windy Gap.

From Windy Gap, head east on the Pacific Crest Trail as it climbs on the north side of the ridge through a dense forest of white fir, sugar pine and Jeffrey pine. There are fine views of the Mojave Desert to the north. The trail passes through a thick mat of buckthorn then begins to climb through a burn area reaching close to the main ridge. For those not accustomed to high elevation, this portion can be a heart pounder. Finally, the trail levels off again and enters a dense forest of white fir and lodgepole pines which usually grow above 8000 ft. in the southern ranges. As the trail drops down into a saddle it passes an impressive ancient limber pine. Some of these trees can live over 2000 years. A short distance later, or 1.4 miles from Windy Gap, the trail reaches the signed junction with the Hawkins Ridge Trail #9W28.

The highlight of this loop is the wonderful trek down the Hawkins Ridge Trail #9W28 as it enters into the Sheep Mountain Wilderness. The trails drops down on the east side of the ridge reaching a saddle. Note the change in rock type indicating a fault passing through the gap. Runners often climb the ridge south of this saddle to reach the summit of Middle Hawkins Peak.

The trail passes through a very rocky slope then reaches some nice flat areas. There are many fine places to take a break and enjoy the view of the deep chasm formed by the East Fork of the San Gabriel River and the imposing summit of 10,064 ft. Mt. Baldy rising abruptly above it. The rock work on this trail by the San Gabriel Mountains Trailbuilders is impressive and has held up well over the decades ago when it was built. As the trail descends, it passes through several meadows that can be full of purple lupine in spring (usually mid-June) if the right winter conditions occur. After 2 miles, it joins a short spur road that leads to a saddle and the junction with the South Hawkins Road #3N07.

From the saddle the trail continues south up the ridge to the top of South Mt. Hawkins. A fire lookout tower stood here until it burned down in the 2006 Curve Fire. All that remains is the foundation. The view from the summit is spectacular and covers a large area of the forest. The reservoirs in San Gabriel Canyon are directly to the south and the snaking Highway 39 can be seen all the way up to Crystal Lake. Give yourself plenty of time to soak up the views.

Descend back on the trail (the road can also be taken but is far less interesting) to the saddle then pick up the road as it descends the west side of the ridge. It is a long 3.5 mile run on this narrow dirt road that is impassible to vehicles. The road is only cleared when there is a need such as a wildfire otherwise it is allowed to fall into disrepair. There are numerous rock slides, fallen trees, and other obstacles along the way, and the road routinely washes out in places like Snowslide Canyon where a fault has seriously fractured the rock (look for where the white rocks meet the brown rocks). The campground, day use area, amphitheater, and cabins can be seen below along with the cars parked in the trailhead. The road finally reaches the Windy Gap Trail #9W06 which can be taken back to the starting point.

Hawkins Ridge Trail was built by the San Gabriel Mountain Trailbuilders in the 1980's. The South Hawkins Lookout burned down in the 2006 Curve Fire. 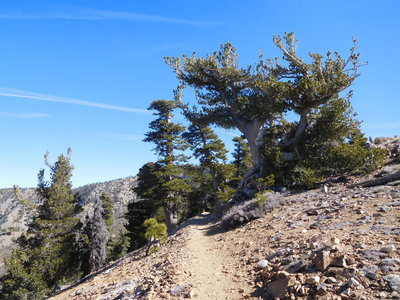 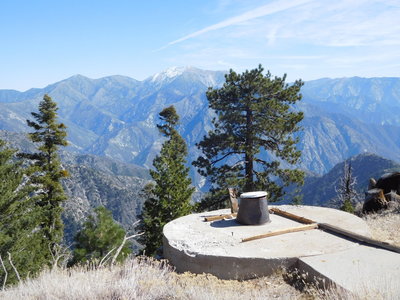 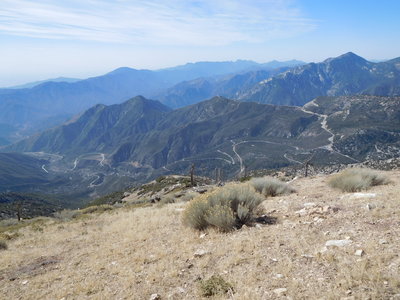 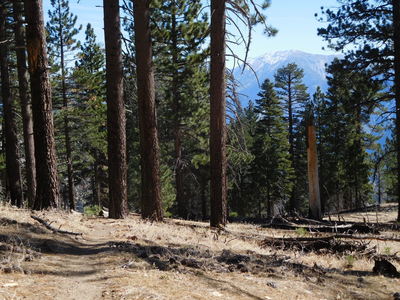 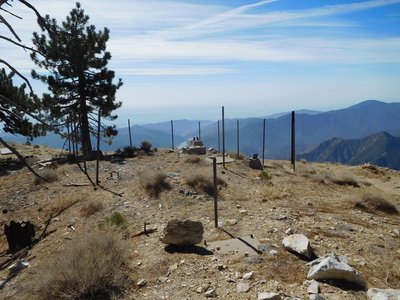