“Himmeltindan has the highest elevation of any mountain on the central Lofoten island of Vestvågøya. ”

One of the highest peaks in the region and the highest on its island. It provides the best view of the southeast chain of Lofoten that we saw during our stay. It can easily be completed in 3-4 hours for people with reasonably good fitness.

When we went in mid-June, there were three rather dicey snow crossings which add an element of risk which must be considered. One was about halfway up the main climb and crossed a creek. A breakthrough would have been wet, but MAY have caused injury. The second was about 3/4 of the way up and required a scramble of sorts to maintain footing. A slip MAY have caused injury, although probably not serious. The third was within 100 meters of the summit. This patch has a steep snow-covered drop to the left, which, if you slipped, serious injury LIKELY would occur. Be mindful of the conditions and exercise good judgement. I would guess that by mid-July the snow is no longer a factor.

There are two places to start the run. The first you come to is before the tunnel on the left. The second is through the tunnel. I believe that the first location is best because it is very close to the beach which makes an interesting stroll following the run. From this parking area, looking away from the beach, follow the paved road up the hill. The mountain will be to the left. After 500-600 meters, there is an old path up to the mountain pass on the left. If you hit the lake, you've gone too far.

Climb a short steep section up a couple of switchbacks, then enjoy the views as the trail flattens and the grade remains easy for a little over a half mile. After the second pond, there is a junction. Stay right to continue on Himmeltindan Trail which veers toward the mountain.

About 0.8 miles in, the trail begins to step as it climbs the mountain. The trail is pretty well-worn so it is easy to follow. After about 1.8 miles of hiking, you'll work your way around the ridge, following the contour just below it. The summit will appear here for the first time. If it is clear, the north summit should be straight/left with a radar tower on it. The south summit, which is the hiker's destination, is more to the right.

We stopped about 100 meters shy of the summit because of a steep snow crossing in mid-June. I cannot comment on how to traverse the remainder to the summit because we were unable to complete the last section (see Need to Know). However, the trail hooks back south and climbs the rocky edge to the top. Despite not being able to summit, the views were spectacular from the ridge that we made it to and the summit was within view. 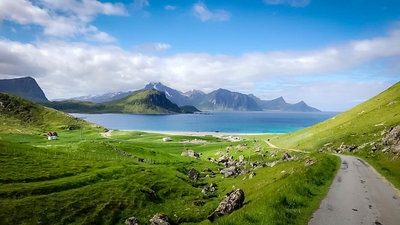 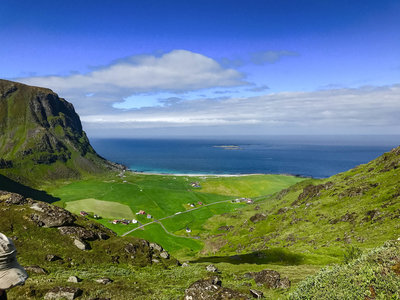 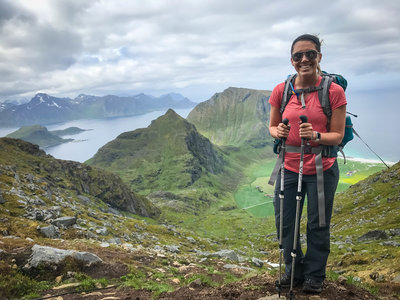 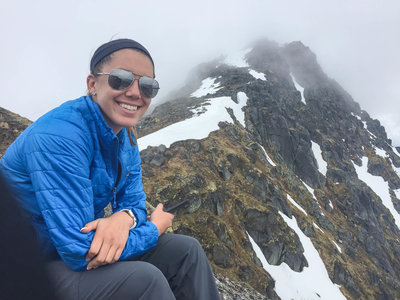 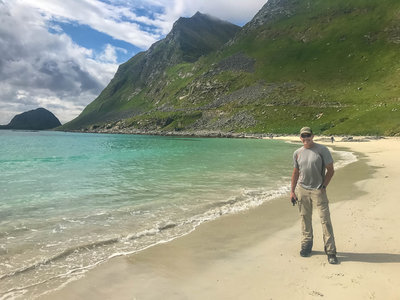