“A long, remote haul through the Uncompahgre Wilderness where the views never disappoint. ”

Most runners split this loop into two days, so follow all Uncompahgre Wilderness regulations while camping.

This 26-mile loop is a classic backpacking trip, with ample opportunities for views, wildflowers, wildlife and solitude. The best time for this trip is during late July and early August once the snow has melted and the wildflowers are in full bloom.

In spring, the snowmelt could make crossing the East Fork of the Cimarron River dangerous, so plan accordingly and be prepared.

Either trailhead can be reached in the winter by snowmobiles, skis, or snowshoes; but both forks traverse avalanche terrain, especially near the pass.

You can park your car anywhere along either road, but to get the bulk of it out of the way first, I parked mine at the intersection where the two forks split, then started down the Middle Fork of the Cimarron. Following Middle Fork Road 4.6 miles to the trailhead, the slower pace affords great views of Turret Ridge, Dunsinane Mountain and Precipice Peak along the way.

Meeting with the Porphyry Basin trail at 1.9 miles, the route drops to cross Prophyry Creek. Steep switchbacks then summit a sloping plateau, where the trees thin with blowdown. Here, you’ll find faraway views of Dunsinane Mountain and Precipice Peak to the north, as well as the coming mountains at the head of the basin.

Funneling towards a narrow shelf high above the river, the trail slowly loses ground on its way to treeline. Meeting with the river's steep gorge at mile three, you'll come to the first of a half dozen primitive campsites strewn across the next 1.5 miles.

Laying bare a breathtaking view of Coxcomb and Redcliff Peaks, a meadow at the fringes of treeline draws the route into the head of the basin. Steepening, the trail completely disappears in the tundra, but posts and cairns mark the route as it veers east towards Middle Fork Pass. Topping out just above 12,600 feet, 5.4 miles in, the air is thin, but the views stretch far and wide.

With the worst of it behind you, the trail, still faint, utilizes a steep ridge of loose sand to find its way towards the East Fork Cimarron River. Easing briefly halfway down, the trail reemerges with a set of tight, looping switchbacks. Flattening to parallel the river across the next 1.4 miles, Middle Fork #227 meets with East Fork #228 at the edge of treeline.

To continue the loop, turn left, where a number of campsites (some frequented by elk) pepper the woods. Drifting west to drop into a wet drainage that spills from high within the basin’s rocky wall, a narrow flat stretched tight on the opposite banks weaves alongside the scree-covered slopes. Slowly pulling back towards the East Fork Cimarron River, the trail meets with the raging, snow-fed waterway 3.4 miles from the pass, after a loss of 1,700 feet.

Crossing to the eastern banks, the grades abate. In another wide thicket marred by heavy blowdown, the trail stumbles across the Silver Jack Mine, just 0.2 miles from the intersection.

Losing 100 feet across the next 0.9 miles, the rugged summits of Pinnacle Ridge become clearer up ahead. A long stretch marked by waterfalls meets with one final difficult crossing, this one aided by cairns. Then, trapped between Sheep Mountain and Pinnacle Ridge, the basin walls widen, and the final five miles unravel along an easy grade on an old mining road that hugs tight to the East Fork Cimarron River.

I saw deer along both forks, and signs of elk near the head of the east fork. Wildflowers make both these forks a destination in peak season.

Most of the East Fork follows an old mining road which led to the Silver Jack Mine. This mine once brought in gold, lead and silver, but today, only a few collapsed cabins and rusted mining equipment remain. 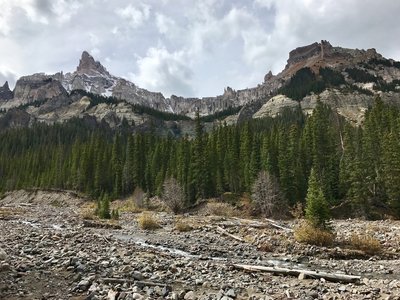 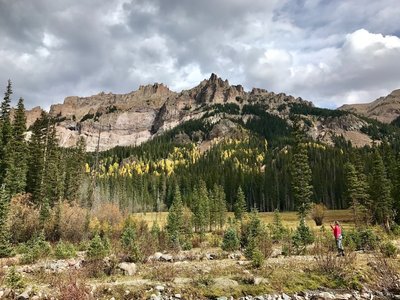 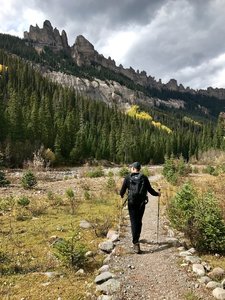