“This trail is located near the Khndzoresk village and leads to the St. Hripsime and St. Thaddeus churches. ”

Cell service (via VivaCell-MTS and U-Com) is available throughout the area, and the 911 emergency service operates throughout Armenia in case of any accidents. Be sure to bring bottled water.

This trail is located near the Khndzoresk village in the Syunik province. The slopes of the steep gorge are punctured by cave systems where the inhabitants of Old Khndzoresk used to live, sheltered from the constant skirmishes of invading armies. The St. Hripsime and St. Thaddeus (Surb Tatevosi, in Armenian) Churches are also located in this gorge. Mkhitar the Commander (Sparapet, in Armenian), a prominent Armenian military commander of the 18th century and a remarkable representative of the Armenian Liberation Movement, is buried in the churchyard of St. Thaddeus Church.

The “Swinging Bridge” of Khndzoresk spans the width of the gorge, providing easier access to the other side from the village of New Khndzoresk. Crossing the bridge promises to be a bit of an adrenaline rush. To reach the end of the trail after crossing the bridge, runners will climb a 390-step wooden staircase. The path is surrounded by aromatic and tasty fruit trees (apple, plum and walnuts) through September to November, making the climb even more pleasant. The best time to visit the are is from April to November.

There are a number of other highly recommended trails around the Syunik province. There are also B&Bs and other accommodation in Tatev, ideal for planning longer stays and experiencing the area in more depth. A great option is staying in the guesthouse located behind St. Minas Church, in the centre of Tatev village, where the marvelous scenery of Mount Aramazd and the Bargushat Mountain Chain can be enjoyed.

En route to the trail there are also some other important sights such as Noravank Monastery in Yeghegnadzor, Zorats Karer in Sisian, the Tatev Ropeway in Halidzor/Tatev, and the Devil’s Bridge at the bottom of the Vorotan gorge.

Despite its small land area, Khndzoresk also abounds in historic and cultural monuments. One such site is St. Hripsime church which was built in 1666, although people are said to have inhabited the gorge for thousands of years. People used to inhabit the caves of Old Khndzoresk until the 1950s, when they were relocated to a more accessible village on the top of the gorge, New Khndzoresk. The last person left his cave dwelling in 1958, and there are often people who were born in the caves, wandering around their old village reminiscing and showing tourists around.

Flora: The trail passes through a forest of oak, hornbeam, maple, and elm.There are a wide variety of fruit-bearing trees including hawthorn, rose hip, wild pear, and wild apple. There are primulas, squalls and other spring flowers, as well as edible mushrooms and other types of herbs. .

Fauna: Brown bears, wolves, foxes, porcupines, moles, seven species of lizards, eight species of snakes, and two species of turtles are often seen in the area. Lizards (including the shy European snake-eyed skink), cat snakes and Transcaucasian snakes are uncommon but not unheard of. 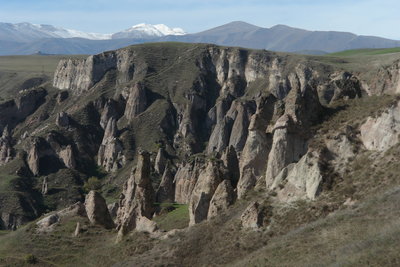 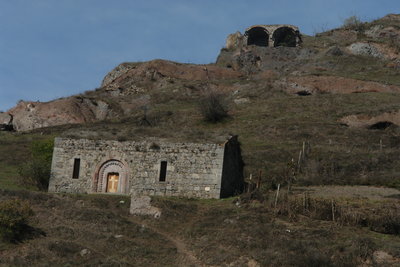 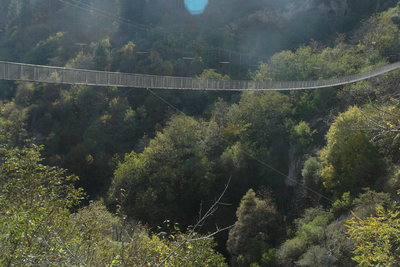