“This trail is located in the high mountainous province of Shirak, which borders the countries of Turkey and Georgia. ”

Cell service is always available in the area, from Harichavank to the forest and to Pemzashen. The 911 emergency services operate throughout Armenia in the case of any accidents. Be sure to bring bottled water!

In order to get to the start of the trail, the most convenient option is to take a taxi from Yerevan to Harichavank, which will cost between 10,000-11,000AMD. It is recommended to take a taxi with a working meter (be sure the driver uses it), or agree on a price beforehand.

The route begins at Harichavank (a monastic complex built in the VII century) located near the town of Artik. Adjacent to Harichavank, there is a religious school belonging to the Armenian Apostolic church. The trail then leads up to the forest, situated high on the top of the neighboring peak, where there once was an active ski base during the times of Soviet Armenia.

Currently, pines and species of firs as well as ash and maple trees are the main “dwellers” of the forest. Runners will also encounter the cool, healing waters of underground springs throughout the route.

Harichavank is a medieval monastic complex located nearby and is one of the many ancient medieval Armenian monasteries. The oldest building is the St. Gregory church which was built in the 7th century, adjacent to which there is a double chapel, built in the 13th century. The major church of the monastery was built in the style of a large cross, a domed building, which was erected by order of the Zakare and Ivan brothers, in 1,201 A.D. This monument is one of the jewels of Armenian medieval architecture, covered with delightful ornaments, and it is appreciated for its simplicity and perfect construction.

The monastery used to be a scientific center as well, and between 1,887-1,889, Avetik Isahakyan studied in the famous school located there. At the Harichavank monastery, future clergymen are brought up and educated. Currently, there are religious schools not only in Harichavank but also in Vagharshapat and Sevanavank.

On the way to Lernakert, heading southeast from Pemzashen, the St. Sion church of Makaravank can be found, which according to records, was built by Sahak, in the year 1,001 AD. The ancient cemetery of the monastery is located around the church. Not far down in the gorge, the St. Astvatsatin single-nave church (17th century) is located. The “Tsak Qar” a small handmade cave is also located here.

The Arakelots monastery is located in the center of Pemzashen village. It consists of three early medieval churches built adjacent to each other. As a group of monuments, it is considered one of the unique examples of ancient Armenian architecture and one of the oldest by its compositional peculiarities.

Flora: Nature in the province of Shirak is full of diverse plant species, various bushes, and trees, and is sparsely covered with forest vegetation. The trail is mainly surrounded by many species of flowers and plants useful for apiculture. Wild herbs useful for medicine are also common here, and during the summer months, the vegetation is thick and very lush.

Fauna: There are few fauna species on the lower slopes of Aragats. Here, sightings of wolves, foxes, rabbits, mice, birds, butterflies, insects, and beetles are common. During the summer months, various species of snakes may also be spotted. 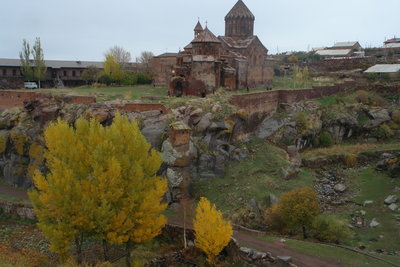