“A beautiful, historic trail winding through the woods right next to downtown Charleston. ”

The Sunrise Carriage Trail is an absolute gem within shouting distance of downtown Charleston. It is a great training trail with beautiful architecture, masonry, craftsmanship, and history in a surprisingly forested setting so close to downtown. There are two parking areas. Located at the bottom of the trail near the South Side Bridge is the Justice Row parking lot. There is also public parking available on Crawford Road at the top of the trail in view of the former Governor's Mansion. The trail is located 5-10 minutes from the I-77/I-64 junction in Charleston. The trail switchbacks its way up the hillside with gentle grades and beautiful craftsmanship throughout.

The trail was originally built by Governor William A. MacCorkle in 1905 to transport building materials drawn by oxen to the top of the hill to construct the Governor's Mansion, also known as the Sunrise Mansion. Instead of pulling the materials up the nearby steep Bridge Road, MacCorkle purchased the wooded land to create a gentler grade that would be easier for the oxen pulling the materials. Apparently, while digging the trailbed, MacCorkle himself uncovered a Civil War gravesite of two women who were thought to be spies and executed, though there are conflicting stories as to which side executed and buried the women.

The more than century old stone walls are often patched up with imprints of local leaves set into them. There is also a small shrine on one of the switchbacks that the Governor erected after his daughter was killed in an automobile accident. The trail ends at the top of the hill at the Sunrise Mansion, where MacCorkle began his horse-drawn carriage rides down the trail each morning on his way to the capitol building.

Please take care of this beautiful trail and donated property and strive to leave it in better condition than you found it. It's a deservedly popular trail for runners, so be friendly and say "hi" to the many folks enjoying the trail.

For more detailed information about the history of the Sunrise Carriage Trail, cclick here. 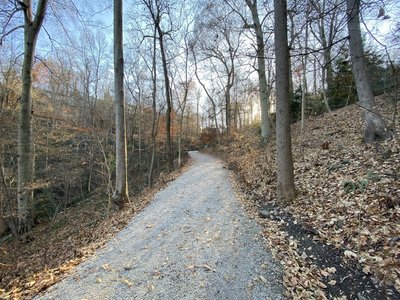 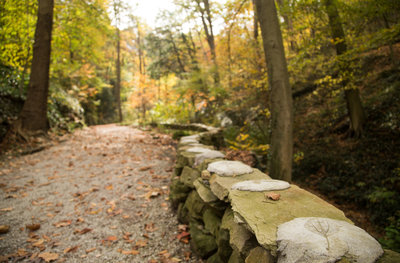 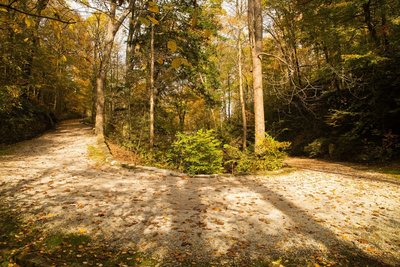