“Saghmosavank Monastery stands on the edge of the deep Kasakh River Gorge. ”

Cell service (via Ucom and VivaCell-Mts) is usually available on the trail from Saghmosavank to Hovhannavank. It is not advisable to go down the gorge in rainy weather, as the footing can be slippery. 911 emergency services operate throughout Armenian in case of any accidents. Be sure to bring bottled water.

This run, in the Aragatsotn region, will take you through beautiful mountainous scenery and to the Hovhannavank and Saghmosavank monasteries. You'll see the Hatis mountain (2,524 m) to the east, Ararat (5,165m) to the west, Ara (2,605 m) to the south, and Aragats (4,095m), Armenia’s highest peak, to the north. The best time to visit the region is from April to November, and the cost to reach the start of the trailhead from Yerevan is approximately 3,500 AMD.

The trail will first take you to Hovhannavank, then down into the river gorge, and along the river up to Saghmosavank.

Hovhannavank Monastery (built between the 5th - 13th centuries) sits on the right edge of the Kasakh River Gorge in Ohanavan village. It was dedicated to John the Baptist, and was a part of the historic Ararat province of Greater Armenia. Legend credits its founding to Gregory the Illuminator (3rd – 4th centuries).

The church, now surrounded by cemeteries, used to have wide arable lands, gardens, pastures, mills and villages. It was also a remarkable center of education, with a rich repository of manuscripts (some of which have been preserved up to this day). In the 17th century, Zakaria Sarkgavag Kanakertsi resided here. It was he who wrote the story of Hovhannavank. Hovhannavank fell into disuse in the 19th century.

Saghmosavank Monastery was also built on the edge of the river gorge. Built by Prince Vache Vachutyan and his dynasty in the 13th century, the monastery consists of the St. Sion and St. Astvatsatsin (St. Holy Mother of God) churches, a narthex and a scriptorium.

St. Sion is the main church of the complex; it is a domed church with several aisles and a four-pillared narthex on its west side. The scriptorium-church is located on the southeast of St. Sion. It differs from other scriptoriums of its time through its unique layout, wherein its walls have niches and it has an altar on its east side. A cemetery, full of remarkable cross stones and monuments is located on the north end of the monastery.

The trail climbs steadily along its length as it parallels the impressive Kasakh River Gorge. Additional chapels and monasteries made of stone can be found in ruins along the way. Caves and animal dens are spread along the canyon. The trail ends at Saghmosavank village.

Flora: Yellow flowers, commonly known as ascension flowers as they bloom on the eve of Ascension Day (a religious event), are found along the trail. There are also yellow dandelions, chamomiles, blue forget-me-nots, colorful violets, flowering thorn plants, edible mushrooms, and herbs. The herbs are collected by the villagers in spring and used in cooking, especially in dishes that include eggs. There are apricot, peach, and apple tree orchards adjacent to the trail making a lush setting in the spring and summer.

Fauna: In Aragatsotn, the meadows, cornfields, and slopes up to the summit are abundant with reptiles; the dilapidated monuments are full of snakes (like vipers and green adders) and lizards. In the mountain forests, brown bears may be spotted, as well as their tracks and dens. The sightings of hares, wolves and foxes are also common. Birds like wood and field larks, owls, quails, woodchat shrikes and others. 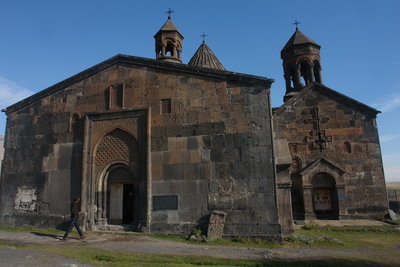 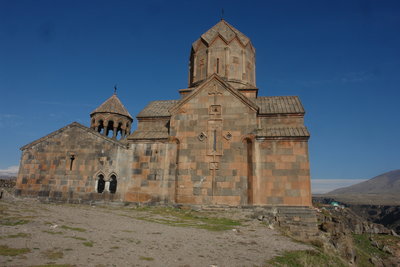 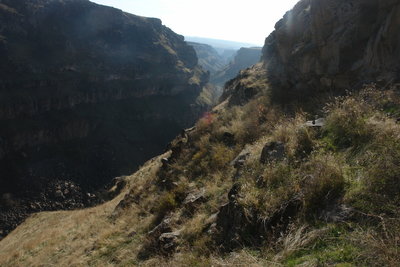